It seems that now when an oil company's earnings increase, financial pundits say it "rocketed" upwards or some other hyperbole like that. Sure, Royal Dutch Shell's (NYSE:RDS.A) (NYSE:RDS.B) third-quarter results were better than the past few quarters thanks to the BG Group deal, but the devil's in the details. Let's take a look at the company's results and why they improved, as well as peek into Shell's near-term future as 2017 comes into focus.

OK, Shell's quarterly earnings report looked good. Before everyone jumps for joy over that big jump in earnings year over year and the increase in cash flow compared to the prior quarter, though, we need to look back at those quarters to get the full picture. In the third quarter of 2015, the company took several billions of dollars in writedowns related to its Arctic drilling program in the Chuckchi Sea as well as suspending development of its Carmon Creek oil sands project. In total, Shell took $8.5 billion in non-cash charges that year. If we were to back out all non-cash charges for both third quarters, then 2016's $2.8 billion in earnings versus 2015's $2.4 billion doesn't look as huge as the GAAP numbers suggest.

On the cash flow side of things, the reason that this quarter and the prior one look so radically different is that the company had a major reversal in working capital and deferred taxes that boosted operational cash. In the second quarter, working capital builds and payments of deferred taxes took $3.1 billion of cash, while Shell realized a working capital draw-down and a deferred tax gain of $1.1 billion. When you consider these all of these factors, Shell's results aren't that far off the prior quarters.

Since the company's earnings have been so fluky over the past several quarters, here's a look at the company's segment earnings before all of those writedowns and charges to the income statement to give a more apples-to-apples comparison of the business. 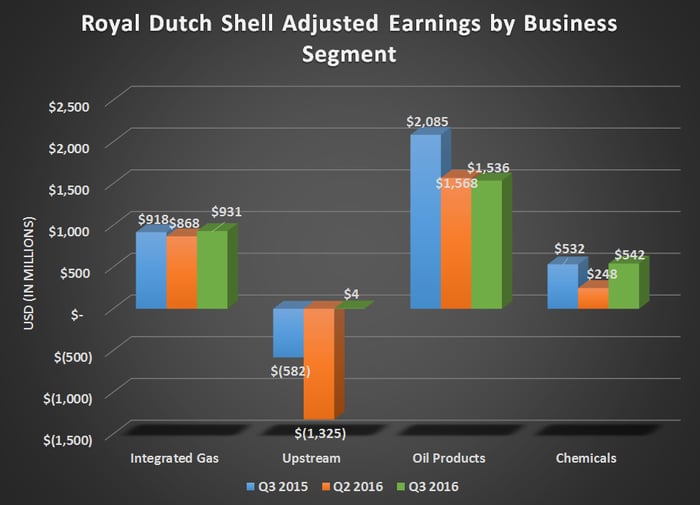 The big turnaround for the company came from its upstream oil and gas production, which turned a profit for the first time since 2014. The largest two contributors of that were a return to profits in its South American segment and mitigating losses in North America.

At the end of the quarter, Shell's net-debt-to-capital ratio stood at 29.2%, a major uptick from 12.7% this time last year that is a reflection of the BG Group acquisition. As Shell executes its $30 billion asset sale plan -- the company announced it is working on 16 sales right now -- it will put a big chunk of that toward debt reduction.

Now that the end of the year is coming closer, Shell and many others are putting the finishing touches in this year's capital spending program as well as giving a little more clarity into 2017. In Shell's press release, CEO Ben Van Beurden highlighted less capital spending for this year and next on top of the cost savings it is realizing from the BG Group deal:

In parallel with the integration, we have been managing the company through the down-cycle by reducing costs and investment levels, while executing our asset sales plans and starting up new projects.

Our underlying operational costs in 2016 are already at an annualized run rate of $40 billion, $9 billion lower than Shell and BG costs in 2014. They're set to reduce further on a like-for-like basis as deal synergies and improvements are delivered in full.

Also, CFO Simon Henry did note that the integration of BG is ahead of schedule and the $2.5 billion in cost savings from business synergies by 2018 has already been accomplished, and it has bumped its 2018 savings target to $4.5 billion.

When a company makes a transformative acquisition like the one Shell made, it can be hard to make a snap judgement as to whether the new company is a good investment or not. As we get to see a couple quarters of combined results, it's looking like this deal is actually paying off: Costs are coming down, production levels are on the rise, and there are a lot of efficiencies getting squeezed out.  If Shell can keep this up and can put that asset-sale program to work on debt reduction, then the company should be in pretty good shape in a year or two.

That being said, the company is still lagging behind its peers in terms of generating returns on capital employed and returns on equity. So while there is promise that Shell can do better in the future, it hasn't yet shown it is a better investment than some of the other companies in the integrated oil and gas industry.

Royal Dutch Shell's Q3 Earnings: Good, but Not As Great As Some Have Declared @themotleyfool #stocks $RDS.A $RDS.B Next Article
Current