Confirming reports earlier in the week, the data and storage-networking provider got bought out by Broadcom. 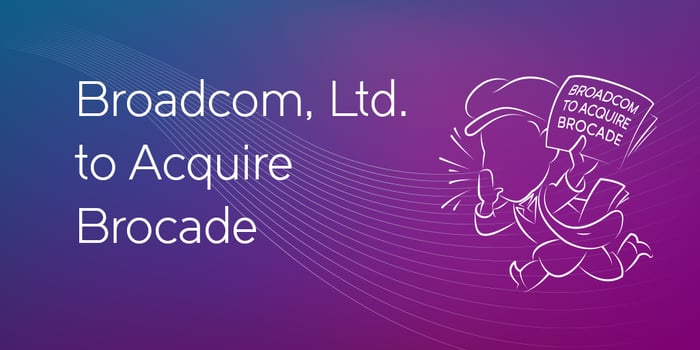 Shares of Brocade Communications Systems, Inc. (BRCD) were surging today after its acquisition by Broadcom (AVGO -0.41%), following days of anticipation. The networking specialist had jumped 22% on Monday when news of a pending deal was first reported, and popped again today as it was completed. As of 12:52 p.m. EDT, the stock was up 10.1%. Broadcom shares were up 1.1%.

Broadcom will pay $5.1 billion in cash for Brocade, valuing the target at $12.75 per share, which is a 47% premium over the stock's closing price on Friday, before reports of a deal began to pump up the share price.

In a blog post, Brocade CEO Lloyd Carney said, "We were not looking to sell the company. However, when Broadcom approached us with a compelling offer, we had an obligation to consider that offer, along with other alternative opportunities. After careful consideration, we concluded that Broadcom's offer was in the best interests of our company and its shareholders."

Both boards unanimously approved the deal, and now Brocade shareholders must vote on the acquisition. The buyout looks like a win for Brocade shareholders, as the $12.75 per share price values the company at nearly its 10-year high, and a wave of consolidation in the semiconductor industry may mean that a tie-up is in the best interest of both companies. Broadcom will absorb Brocade's storage-area network business, but the companies will look for a buyer for Brocade's IP networking business, due to a competitive overlap with Broadcom's customers.

The stock is still trading at a 3% discount to the buyout price, indicating some skepticism that the deal will go through. The transaction is expected to close within the next six months.

How Risky Is Extreme Networks, Inc.?