Shares of Brocade Communications (NASDAQ:BRCD) rose 16.4% in November, according to data provided by S&P Global Market Intelligence. The company announced on Nov. 2 that it had agreed to be acquired by Broadcom Ltd. (NASDAQ:AVGO), which prompted the surge in the stock price.

Broadcom agreed to pay $12.75 in cash for each share of Brocade, valuing the company at $5.5 billion, plus $0.4 billion of net debt. That price represents a 47% premium on top of Brocade's closing price on Oct. 28, and roughly the same level at which the stock peaked in early 2015. 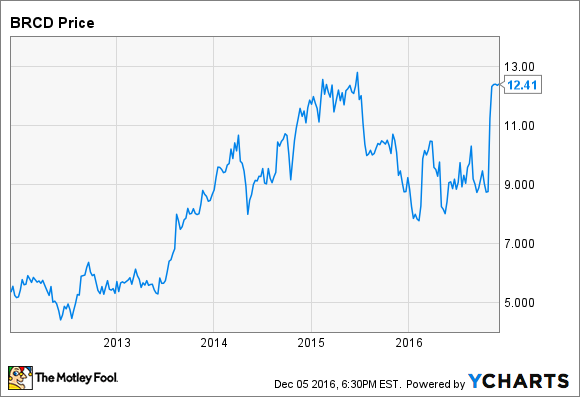 Despite an opportunity for vertical integration, Broadcom plans to divest Brocade's IP Networking business following the close of the transaction. This business includes wireless and campus networking, data center switching and routing, and software networking solutions. Broadcom sells chips that power networking hardware, so the company may be looking to avoid competing directly with any of its customers.

This strategic acquisition enhances Broadcom's position as one of the leading providers of enterprise storage connectivity solutions to OEM customers. With deep expertise in mission-critical storage networking, Brocade increases our ability to address the evolving needs of our OEM customers. In addition, we are confident that we will find a great home for Brocade's valuable IP networking business that will best position that business for its next phase of growth.

Brocade is a leader in Fibre Channel storage area network switching, a business explicitly singled out by Broadcom in the press release announcing the deal.

Broadcom and Brocade expect the deal to close during the second half of Broadcom's fiscal year 2017. Upon closing, Broadcom expects the acquisition to be accretive to its non-GAAP free cash flow and earnings per share. The company expects Brocade's Fibre Channel storage area network business to contribute roughly $900 million of pro forma non-GAAP EBITDA in fiscal 2018.

Broadcom was formed via the merger of Avago and the old Broadcom, and the company isn't slowing down when it comes to acquisitions. Broadcom is already one of the largest semiconductor companies in the world, with nearly $11 billion of revenue over the past 12 months, and the Brocade acquisition will add to that total.