Networking software and equipment maker Extreme Networks (NASDAQ:EXTR) reported fourth-quarter results earlier this month, and it was a stellar performance. Sales rose 28% year over year, adjusted earnings more than doubled, and Extreme shares jumped as much as 14.7% higher on the news.

Extreme investors have enjoyed a 23% return since that report. Share prices have also more than doubled in 2017 and gained 170% in 52 weeks.

To go along with that electrifying earnings report, Extreme Networks' management held a conference call with Wall Street analysts. Here are a few of the most enlightening details from that event.

Our anticipated near-term decrease in gross margin is driven by the addition of the Avaya Networking business. We expect this to be dilutive to gross margins for a few quarters until we see sales discounting return to normal levels and we improve this business with our gross margin initiatives....

Coming out of bankruptcy, the discounts were steeper than usual, steeper than their historical discounts had been. And we're starting to tighten that up, and it's a matter of how fast can we get control of that in this first quarter that we own the business.

Buying other companies out of bankruptcy can add new assets on the cheap, but it's not always a painless experience. In this case, Avaya tried to prop up its collapsing business with generous discounts, and it will take new owner Extreme a few weeks to reverse that pricing policy.

The upcoming buyout of Brocade 's (NASDAQ:BRCD) data center networking operations is different. Here, Brocade was doing fine on its own but was asked to shed some of its assets before merging its core business with Broadcom (NASDAQ:AVGO). So Extreme gets to pick up a high-quality business without the headaches of recent bankruptcies, thanks to the findings of antitrust regulators.

Extreme is generally quite happy to grow by acquisition, having completed many smaller deals in recent years. In this way, management is building a significant challenger to the big boys of enterprise-class networking tools.

The benefits of higher-quality solution sales are evident in fourth quarter gross margins that jumped 230 basis points year-over-year to 57.1% and increased by 270 basis points in fiscal '17. Solution selling, when we lead the sales process with our software, is being embraced by our field teams and delivering sticky customers with higher gross margins. We also drove more than 20 distinct gross margin improvement initiatives this year. Changes in discounting policies and procedures, supply chain improvements and product life cycle management were also major drivers....

We are focused on delivering our 60% gross margin target by fiscal Q4.... We expect to reduce Avaya's discounting levels that increased during bankruptcy and to extend our gross margin improvement initiatives to the Avaya business. And when the Brocade transaction closes, their higher-margin data center business will also help us move toward our 60% target.

So Extreme Networks has a plan in place to reverse the damage from Avaya's deep-discount pricing policies. Beyond just stepping Avaya's prices back up, the Brocade deal will add an immediate shot of gross-margin adrenaline and the company is also using a new, mor profitable sales process.

Overall, the company is shooting for gross margins above 60%. It's actually a process that started several years ago, and investors have embraced gross margins as a core value driver for this company and stock: 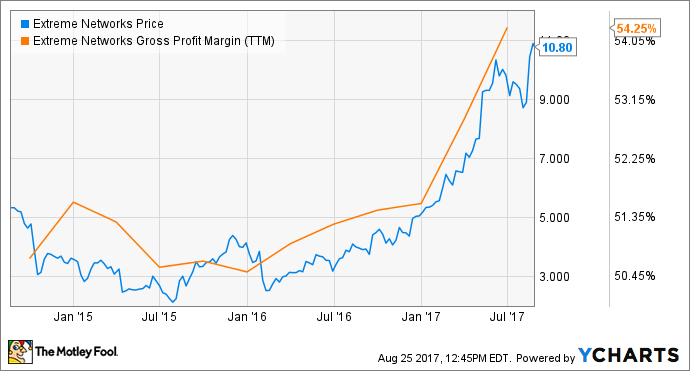 Enterprise customers have been highly supportive of our strategy. They want an end-to-end vendor with better solutions and better service to provide a competitive alternative to Cisco. In the fourth quarter, there were tens and tens of deals won where we heard this feedback from customers....

We beat out Cisco and HP-Aruba with the Tampa Bay Bucs, another NFL win due to our performance in Super Bowl 51 and the complete end-to-end solution with wired/wireless, unified with our access control management and analytics.

Very few companies can compete with Cisco's complete end-to-end portfolio of networking solutions, but Extreme will be one of them when the Brocade merger is completed. The company can already win head-to-head contract challenges based on its powerful network management software, designed to be agnostic about the actual routing and switching hardware it's being set up to manage.