The third quarter is going to be the start of a rough stretch for the solar industry. And First Solar (NASDAQ:FSLR) led off with an earnings report that showed both the struggle and opportunity the industry has ahead. Let's take a look at what we learned. Third quarter revenue came in at $688.0 million, gross margin was 27.1%, and net income was $154.1 million, or $1.49 per share. Revenue was slightly lower than expected due to a delay in projects being sold to 8point3 Energy Partners (NASDAQ:CAFD) or other investors. Guidance showed a similar trend.

Full-year revenue guidance was reduced about $1 billion to $2.8 billion-$2.9 billion, while earnings per share guidance was increased slightly to $3.75-$3.90. Interestingly, even with the lower revenue guidance First Solar said gross margins would be 25.5%-26%, a full 700 basis points higher than previous guidance.

As I mentioned, lower revenue guidance is due to the timing of project sales. But notice that EPS guidance and gross margin guidance actually increased. Management said this was because the projects that will likely be sold early in 2017 are very low margin and the component business First Solar is now focused on is generating strong margins. More on that business in a minute.

Another thing worth noting is a 30 basis point improvement in fleet average efficiency to 16.5% and a similar improvement in the best line to 16.9%. That's better efficiency than commodity solar panels, which is why First Solar is now making money while less efficient manufacturers aren't.

Where there's uncertainty in solar

One of the negative trends for the solar industry is that module prices are dropping like a rock, and that will eventually crush margins for solar panel manufacturers. Just take a look at this chart from First Solar's earnings release. 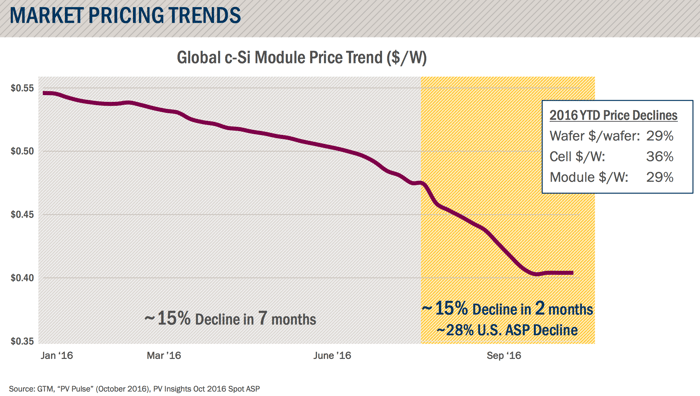 First Solar hasn't gone chasing sales on low prices, instead choosing to focus on reducing the cost of its modules and waiting until conditions improve, but that'll impact revenues in the future. So far in 2016, bookings are just 1.6 GW compared to 2.2 GW in shipments. And worse yet, those bookings are worth just $1.1 billion compared to $2.5 billion in economic value installed.

We know 2017 is going to be rough for solar companies, and that's what you're seeing in the weak bookings figures.

So we know that First Solar's component business is doing well and that bookings will be weak next year. And that's causing management to consider how to move forward with its next generation Series 5 and Series 6 modules and systems. Due to market conditions, it may make sense to put all of its efforts into pulling Series 6 forward and just skipping Series 5.

Management wasn't willing to commit to that strategy, but based on comments during the conference call it looks like that's the way they're leaning. That could mean heavy investment in upgrading equipment in 2017, but that could be the right move in a bad year for solar developers.

A bright future will come eventually

There's no doubt the next 18 months will be rough for First Solar and the rest of the solar industry. But that may give the company incentive to invest in moving the higher efficiency and lower cost Series 6 system forward, becoming more competitive in the future. And with strong margins coming in for the sale of components, there's a strong indication there will be a big financial payoff if it does.

Investors taking a Foolish long-term perspective should see First Solar's progress on technology and maintaining strong margins as encouraging. It may take a couple of years to get back to a more normal state for the industry and First Solar's financials, but the payoff could be worth the wait.