After the company reported disappointing third-quarter results, Pfizer's (NYSE:PFE) dividend is starting to look like the primary reason to buy -- or hold -- this megacap pharma stock. After all, the drugmaker's earnings release was actually chock-full of bad news and worrisome trends that went well beyond its weaker-than-expected quarterly figures.

Now, Pfizer still sports modest single-digit growth prospects heading into 2017 -- despite these negative developments. However, this stock is arguably more attractive to investors looking for passive sources of income, rather than those interested in growth. With this in mind, let's take a look at how Pfizer's dividend stacks up against its big pharma and blue chip biotech peers in terms of yield and sustainability.

Pfizer's dividend is a mixed bag

At 3.7% at current levels, Pfizer's yield easily beats the average within its large-cap biopharma peer group, as illustrated by the chart below: 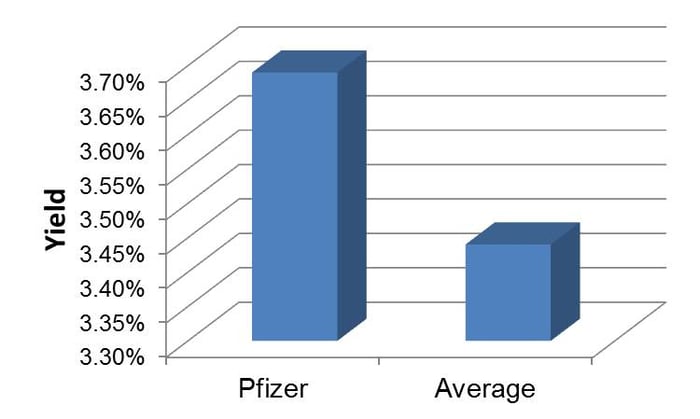 However, it remains well below the monstrous yields offered by the British pharma giant GlaxoSmithKline (NYSE:GSK) (4.6%), as well as the French drugmaker Sanofi (NASDAQ:SNY) (4.3%). In other words, Pfizer's yield might be better than average for a major drug manufacturer, but it doesn't occupy the high-yield area of the curve set by companies like Glaxo and Sanofi.

As far as the sustainability part of the equation, Pfizer's trailing-12-month payout ratio of 102% doesn't exactly inspire confidence about the company's ability to maintain its above-average yield at current levels. The catch, however, is that Pfizer's sky-high payout ratio is actually below average for a large drugmaker: 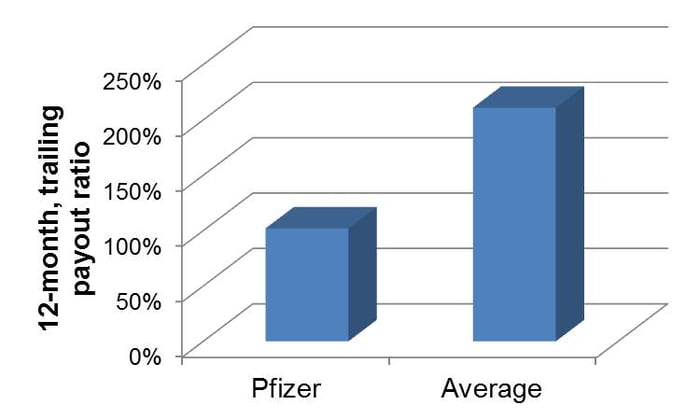 Digging deeper reveals that Pfizer's substantial free cash flow and cash position stack up particularly well when pitted against the high-yielders Glaxo and Sanofi -- implying that its lower yield is ultimately more sustainable.

Is Pfizer worth buying for its dividend?

If we put its robust clinical program that sports a dozen pivotal studies with near-term readouts aside and simply focus on its ability to perform as an income stock, Pfizer matches up well with its peer group. The obvious red flag, though, is its hefty payout ratio.

The good news is that Pfizer's strong cash position, combined with its proven ability to generate ginormous levels of free cash each quarter, should keep the drugmaker from having to slash its dividend anytime soon. Having said that, Pfizer's penchant for engaging in high-dollar mergers-and-acquisitions ventures could dramatically impact its balance sheet, perhaps triggering a dividend reduction.

All in all, Pfizer's above-average dividend does come across as a compelling reason to own this stock. Even so, income-seeking investors certainly shouldn't sleep on this stock -- as the company's appetite for M&A could necessitate critical changes to its capital distribution plan moving forward.