Yet increased spending may be needed to fuel growth in 2017.

Match Group (MTCH) enjoyed sharply higher profits in the third quarter, but the world's leading provider of online dating products also hinted that increased growth investments could weigh on its profitability in the year ahead.

Dating revenue rose 22%, to $288 million, fueled primarily by the strong growth of Tinder and the recently acquired PlentyOfFish. These positive results, however, were partially offset by a 15% decline in non-dating revenue, to $29 million, due mostly to the continued struggles of Match's Princeton Review business. In all, total revenue increased 18%, to $316 million.

Average paid member count surged 33%, to 5.5 million, with Tinder ending the quarter with more than 1.5 million paid members. Yet average revenue per paying user decreased 8%, to $0.54, due to rapid growth of Match's relatively lower-cost apps, although the decline appears to be stabilizing in recent quarters. 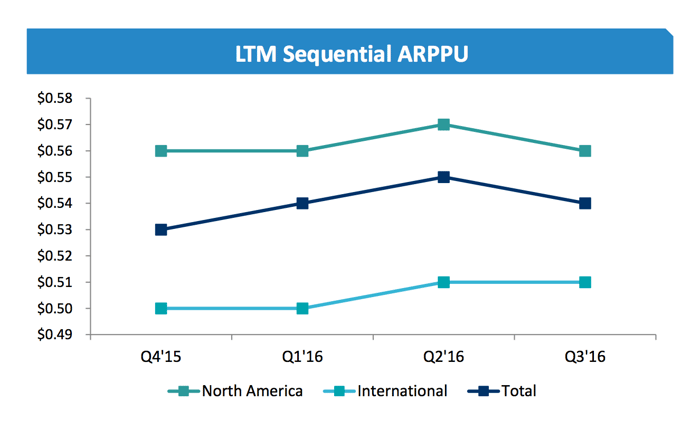 EBITDA (earnings before interest, taxes, depreciation, and amortization) -- adjusted to exclude stock-based compensation expense, acquisition-related costs, and other special items -- leapt 34%, to $111 million. And adjusted EBITDA margin improved to 35%, up from 31% in the year-ago quarter, as an increasing proportion of Match's revenue continues to shift toward brands with lower marketing requirements.

For the fourth quarter, Match Group expects dating revenue near the midpoint of its previous guidance of $292 million to $301 million, with EBITDA margin "modestly below" its prior expectations of the "mid 40s" percentage range.

Match Group also believes its full-year dating revenue will come in near the midpoint of its guidance of $1.1 billion to $1.14 billion, and the company reiterated its forecast for adjusted EBITDA of $400 million to $405 million.

Additionally, Match Group gave preliminary guidance for 2017, including revenue growth of 15% to 20%. However, the company also hinted that 2017 could see increased investment spending to support growth at Tinder and other new business initiatives, which could negatively impact EBITDA margins.

Still, on the whole, management remains optimistic in regard to Match Group's prospects in the coming quarters.

"Q3 was another strong quarter for Match Group," said Chairman and CEO Greg Blatt in a press release. "The outlook for our Dating businesses remains very positive."