Please ensure Javascript is enabled for purposes of website accessibility
Log In Help Join The Motley Fool
Free Article Join Over 1 Million Premium Members And Get More In-Depth Stock Guidance and Research
By Anthony Di Pizio - Apr 27, 2021 at 11:38AM

Despite an ideal environment for online dating, the company continues to grapple with decelerating earnings growth.

The pandemic created a stay-at-home economy that proved to be an ideal environment for many technology companies as consumers spent a lot more time in front of various screens. For Match Group (NASDAQ: MTCH) -- the parent company of online-dating powerhouse Tinder, among an array of other dating apps -- the situation was more nuanced. It delivered a strong increase in revenue in 2020, but that failed to translate into corresponding earnings growth.

Today, despite the 15% decline from its 52-week high, Match still trades at 75 times trailing earnings. With large numbers of people emerging from pandemic shutdowns, investors might want to exercise caution with this stock. 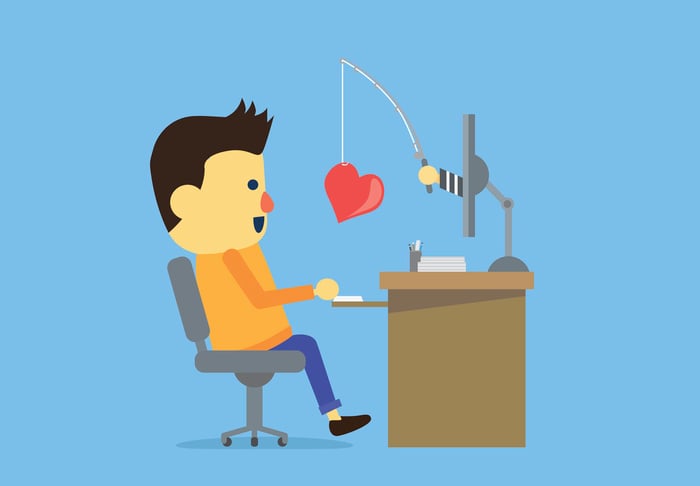 A leader in dating

Match Group owns some of the most recognizable brands in the online dating space, including its namesake Match.com, PlentyOfFish, OkCupid, and the recently acquired Hinge. The company's crown jewel, Tinder, accounted for over 58% of its total $2.39 billion in 2020 revenue, but Hinge was the standout for growth. In the 2020 third-quarter conference call, management noted Hinge's 82% growth in downloads year-to-date, and told MarketWatch exclusively that revenues were on track to triple for the calendar year. That speaks to Match's ability to find new sources of growth.

At face value, Match Group's 17% increase in full-year revenue was quite impressive for a technology company in a more mature phase. However, that growth didn't meaningfully flow through to the bottom line with diluted earnings per share up just 6.4%.

The company earned a fully diluted $2.00 per share from continuing operations in 2020, so as of the closing price on April 23, the stock traded at a price-to-earnings (P/E) ratio of nearly 75. By comparison, the NASDAQ 100 trades at a P/E of about 40 -- so Match commands quite a premium relative to the broader technology index. It's not alone, though. Key competitor Bumble trades at an even higher valuation.

Since 2018, Match Group has experienced moderately decelerating earnings growth, which further calls into question the company's valuation. Exorbitant earnings multiples are typically reserved for hyper-growth companies -- like Amazon (AMZN -2.78%) or Tesla (TSLA -0.32%), for example -- as investors are paying a premium in anticipation of greater earnings in the future. Based on the numbers, Match doesn't fit into that category, and therefore could be considered overvalued.

Its slowdown in growth is partly attributable to an increase in operating expenses, which could signal that Match is struggling to scale its business further. The company's 2020 revenue growth of $340 million cost it $240 million in additional operating expenses, led by a 22% increase in administrative costs and a 12% hike in marketing outlays. While it's great for investors that the company is profitable, the growth rate doesn't justify the current valuation.

Ultimately, Match grew both revenue and operating expenses by 17%. If that pattern continues, earnings growth could eventually fade completely.

As people resume something like normal life, traditional dating can be expected to make a comeback. Things people might do more of in 2021 include going to bars and restaurants, attending large events, and traveling -- all activities where a single person might seek to meet a match. It's reasonable to think that 20-somethings might take more of a "phones-down" approach to this year after a long period of social restrictions. Generally speaking, less screen time is bad news for Match Group.

It's unlikely that consumers will ever leave online dating behind completely -- it's now an integral part of our modern social fabric -- so the company isn't facing an existential crisis. However, given the seemingly perfect environment for the activity in the stay-at-home economy, investors might wonder if Match will ever see a better opportunity to grow its earnings than the year just past.

In the quarters to come, it will be important for Match to at a minimum keep its revenue growth steady, or even better, accelerate it. But it will be imperative for management to do what it takes to get more of that growth flowing through to the bottom line if the stock is going to sustain its current valuation. In the short term, it's reasonable to expect that Match's earnings multiple will contract somewhat, bringing the share price down.