Please ensure Javascript is enabled for purposes of website accessibility
Log In Help Join The Motley Fool
Free Article Join Over 1 Million Premium Members And Get More In-Depth Stock Guidance and Research
By Keith Noonan - Updated Mar 7, 2021 at 9:56AM

These industry leaders could help take your portfolio to the next level.

If you invested in Amazon stock 10 years ago and held on to your shares, the value of your position would have grown roughly 1,660%. An investment in Netflix stock would have yielded a 1,720% return across the same stretch. There are other great businesses that have delivered even better returns recently. E-commerce services provider Shopify's stock surged more than 4,480% over the last five years, for example.

You won't always buy a stock at the best price, but backing great businesses that have sustainable advantages in growth markets will help you score big wins. With that in mind, read on for a look at two companies that have what it takes to crush the market over the long term. 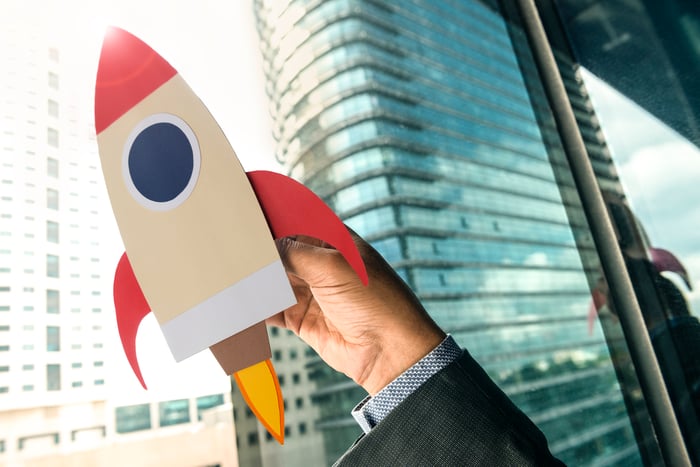 Match Group (NASDAQ: MTCH) is a leader in the dating app market. While its flagship app, Tinder, accounts for a majority of its revenue, the company's corporate umbrella also includes dating services Hinge, Match, Plenty of Fish, and OkCupid. No competitor has a bigger reach in the U.S. and European markets, and it looks like the company's growth story is just getting started.

The coronavirus pandemic has made it more difficult for the business to add paying users, but Match has still managed to post impressive growth. Fourth-quarter revenue climbed 19% year over year to $651 million, and average monthly subscribers increased 12% to 10.9 million.

In a year that was marked by serious pandemic-related challenges, Match still managed to grow its revenue by 17% to reach $2.4 billion. Sales growth came in a bit below the 19% annual increase that the company posted in 2019, but Tinder still stands as the top-grossing non-video-game app in the world, and it's clear there's still plenty of momentum behind the company's business.

Match has a commanding lead in the dating space thanks to its diverse collection of apps. Tinder accounted for roughly 58% of the company's revenue last year, but there's value in the company's ecosystem approach. Tech advances made for one platform can be shared between apps, and strong growth for the Hinge app, in particular, is showing that Match has real opportunities outside of Tinder. The company also has big room for growth in international markets, and recently announced it would spend $1.7 billion to acquire South Korean social media company Hyperconnect.

The dating app market is still relatively young. Bringing more members on board and increasing average revenue per user should lead to big profits over time. Growth for the online dating market seems like a pretty safe bet, and Match has a good shot at maintaining a leadership position in the category.

After hitting a rough patch late in 2018, Activision Blizzard's (ATVI -0.79%) stock price has come roaring back. The video game maker operates a hit-dependent business, and a lack of major new franchise releases combined with declining performance for some properties meant that its growth briefly slowed to a crawl. However, strong sales for the company's Call of Duty series on console and PC platforms and the release of a hugely popular mobile take on the franchise have helped shift its fortunes.

In addition to Call of Duty, Activision Blizzard also produces blockbuster franchises including World of Warcraft, Candy Crush Saga, Diablo, and Overwatch. Following the incredible success of Call of Duty: Mobile, management appears fully committed to bridging more of its intellectual properties to smartphones and tablets. There's big potential there.

Activision Blizzard also has a large back catalog of titles that is ripe for monetization. The publisher has already found considerable success with remakes of games in the Tony Hawk, Crash Bandicoot, and Spyro the Dragon franchises, and there's still a lot of untapped content in the company's library to work with. This approach to monetizing older games has been enormously successful for Nintendo in recent years, with video game rereleases putting up strong unit sales and margins on its Switch hardware, and Activision should be able to do more on that front.

While the natural progression of video game product life cycles means that the company's performance tends to be somewhat uneven, Activision Blizzard has generally done a great job of launching and sustaining lasting properties. The game publisher will continue to play a leading role in shaping the future of interactive entertainment, and its stock looks primed to deliver wins over the long term.