I've repeated many times about how Detroit automakers don't get enough credit for how drastically they've improved the quality, design, and fuel-efficiency of their passenger cars. Ford's Fusion turned into one of the company's best-selling products, and General Motors' redesigned Impala has been a huge hit with critics and consumers. Still, we have to give credit where credit is due, and while Detroit autos improved their passenger cars, Honda Motor Co. (NYSE: HMC) has done the same with its SUVs.

Honda's CR-V flies under the radar

Honda's CR-V was the fourth best-selling vehicle in the U.S. market in October, trailing only full-size trucks. Further, for the full year, Honda's CR-V has outsold any other SUV or crossover in the U.S. market. By Honda's tally, it has sold more than 3.8 million CR-Vs in the U.S. since its debut in 1997, making it the best-selling crossover in the past two decades. So, we have to give credit where credit is due, and while Detroit is still renowned for its SUVs, Honda's CR-V has been a phenomenal success story. 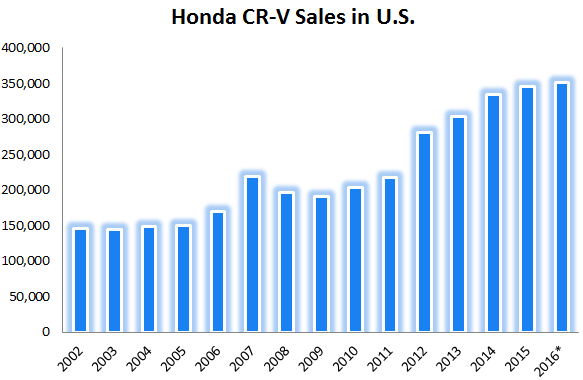 "Get used to the look of this car because you'll soon be seeing them everywhere. Everywhere, I tell you! At the YMCA, at Trader Joe's, in your living room, at Islanders games. This is the crossover everyone buys." said Kristen Lee at Jalopnik.

Get ready for the fifth generation

The crazy thing about the CR-V's sales this year is that despite the vehicle's age -- typically in the auto industry, fresh models sell far better than older designs -- there was no dip in sales. In fact, the CR-V has totaled 293,799 sales through October, which is ahead of the nearest competition in any segment: the RAV4, Rogue, and Escape recorded sales of 286,000, 262,000, and 258,000, respectively.

Now, the question is, how high can sales drive with the model's remake coming up in the 2017 model year? Honda's strategy isn't as simple as you might predict. If the design is too bland, you could end up with an emergency refresh similar to the Civic -- not an enviable scenario. If Honda redesigns the CR-V too boldly or drastically, it could alienate its returning buyers. So, what you get is more of the same, yet better.

The 2017 Honda CR-V may be all new, but it follows the same recipe for success seen in past models. Class-leading interior volume, fuel efficiency, occupant protection and driving dynamics packaged in an attractive exterior design. This approach won't win awards for originality, but the new CR-V's execution will likely win numerous accolades, including that most coveted of claims -- best selling.

For investors, owning a portfolio of strong-selling SUVs, full-size trucks, and luxury vehicles is important for profitability. Those three segments haul in the big bucks for automakers, and while Honda, or any automaker outside of Detroit, has failed to get its foot in the door of the truck market, its progress with SUVs has been nothing short of impressive.

Honda has high hopes for the fifth generation, too, because even as sales in the U.S. plateau, it's tooling its Greensburg plant to start producing the CR-V in addition to the plants currently producing the crossover.

Americans' love affair with the SUV is red-hot again, but we have to give credit where credit is due: The best-selling SUV or crossover isn't from Detroit -- and it might not be for some time.