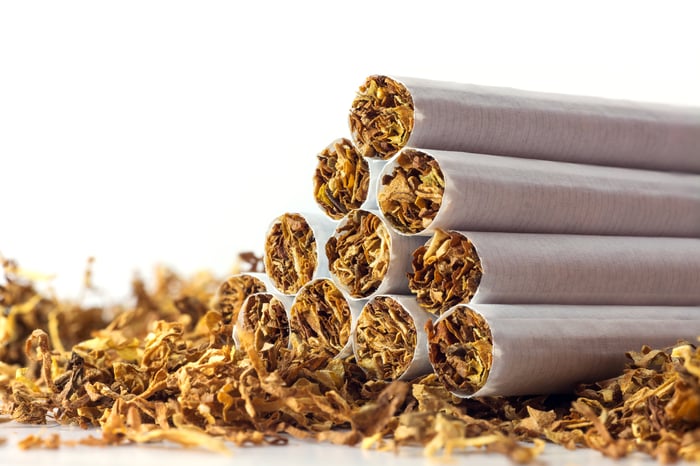 Shares of Reynolds American Inc. (NYSE:RAI) popped last month after the cigarette-maker received an offer from British American Tobacco (NYSE:BTI) to acquire the remaining 58% of the company it doesn't already own. According to data from S&P Global Market Intelligence, the stock finished October up 16.8%, making almost all its gains on Oct. 21 when the news broke. 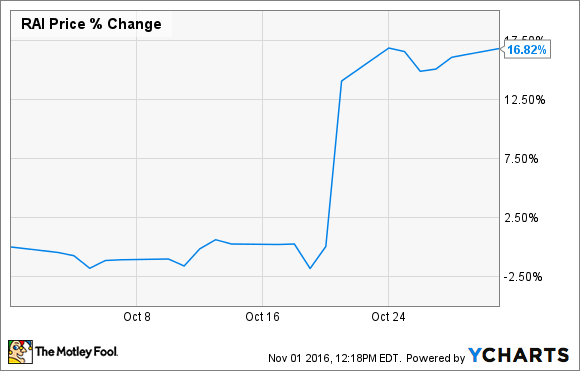 Reynolds American, the parent of brands including Newport and Camel, said it received a non-binding offer from BAT that would cost $47 billion for the remainder of tobacco company, valuing the entire enterprise at $81 billion, or $56.50 a share, about 20% above Reynolds' value prior to the offer. The deal would create the world's largest publicly traded tobacco company, surpassing Altria and Philip Morris.

The announcement came on the heels of a weak third-quarter earnings report that missed expectations on revenue and earnings. Reynolds American managed to deliver a 1.4% increase in revenue despite declining U.S. cigarette volume and cost-savings helped boost EPS up 11%. The company also announced a CEO change at the end of the year, saying that current CEO Susan Cameron will move on to the Executive Chairman role and current COO Debra Crew will become the new CEO.

Reynolds American said Monday that it had formed a transaction committee to evaluate BAT's offer. Reynolds' shares are currently trading 3%-4% below BAT's offer price, indicating investors are somewhat skeptical that a deal will go through. Consolidation has become a pattern in the tobacco industry, as big players look to partner up to fight declining sales volumes with higher prices. Last year, Reynolds American completed its acquisition of the No. 3 U.S. tobacco company, Lorillard, which gave it ownership of the Newport brand -- the fastest growing major brand in the country. Considering the challenges in the tobacco industry, a buyout seems like an appealing outcome for Reynolds, but management may try to extract a higher price.