Shares of Weatherford International (NYSE: WFT) declined 19.1% in October. The largest factor in that decline was the company's earnings results, which were rather disappointing. 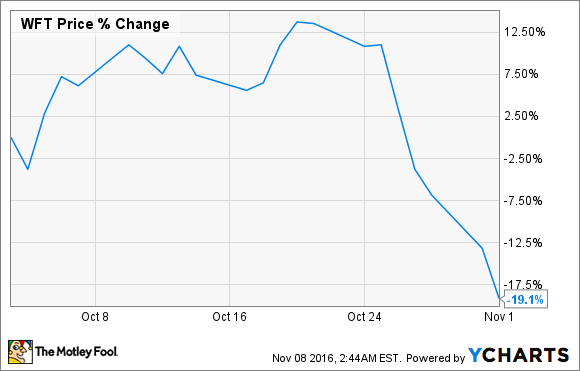 To Weatherford's credit, it has drastically cut costs to mitigate losses, but that hasn't been enough to offset the declines in revenue and a lack of winning new project awards. Though the company started to show progress toward profitability and generating free cash flow to pay down debt last year, Weatherford is back to tapping the debt market to make up for operational cash burn and to refinance debts coming due. This is a big step backward for a company that has been plagued with debt woes for years.

When the oil and gas market does pick back up again, chances are we'll get to see the positive effects of all of this cost-cutting. However, the big concern is still Weatherford's debt load, which has the company moving from one cash crunch to the next. Until the company can really address this with more significant debt reduction and get back to actually generating cash flow, it's hard to see the value in buying Weatherford International's stock today.