As Caesars Entertainment (NASDAQ:CZR) moves closer to resolving the financial structure of its bankrupt subsidiary Caesars Entertainment Operating Company (CEOC), and potentially purchasing Caesars Acquisition Company (NASDAQ: CACQ), the company's finances are starting to become more important to investors than the negotiations taking place in court. And third-quarter results announced after the market closed on Monday give some mixed results for the company.

Before getting to the numbers, I need to lay out the company's corporate structure, which is outlined below. It's a complicated tangle, but for reporting purposes, the company is split between Caesars Entertainment Company (CEC), which owns CEP and CGP, and the bankrupt CEOC. 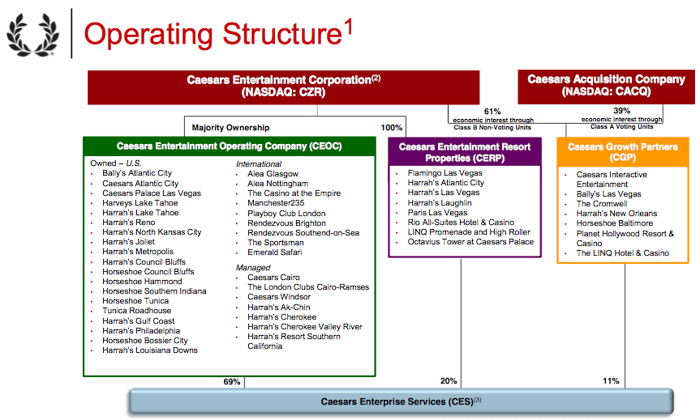 Las Vegas is on a hot streak

Revenue at Las Vegas properties was up broadly last quarter, which is a positive sign for CEC. Revenue the company's resorts were up 3% to $986 million in the quarter, and net income was $5 million. Adjusted EBITDA, a proxy for cash flow from resorts, rose 9.3% at CEC to $269 million. That's the good news.

We don't get a detailed look at how CEOC performed on a resort basis in the quarter, but the do give us a few indicators. The first is that revenue was down at the unit by more than what CEC gained because revenue for the combined company was down 1% to $2.1 billion. More importantly, adjusted EBITDA fell from $313 million a year ago to $276 million. 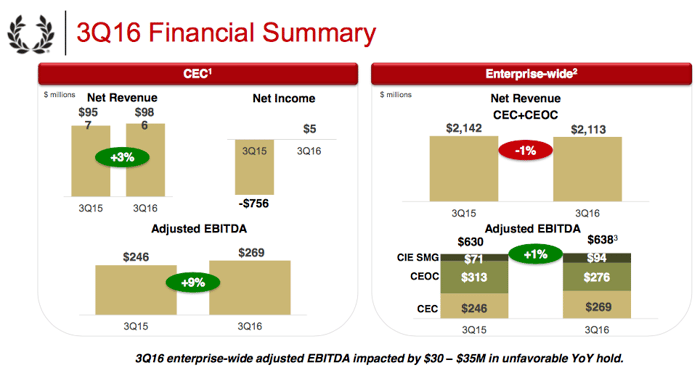 CEOC's only Las Vegas exposure is Caesars Palace, so this indicates that regional gaming locations like Atlantic City, Lake Tahoe, and Council Bluffs, Iowa are seeing declines in revenue and EBITDA. This isn't surprising given the long-term trends in regional gaming in the U.S., but combining a growth business with a declining business could leave Caesars stagnant for years to come.

A major factor investors have to contend with is the fact that CEOC is still bankrupt and creditors haven't agreed to a finalized restructuring. Sure, a deal is moving closer, but until it's signed and completed the negotiations could fall apart and Caesars Entertainment could end up bankrupt.

Right now, the deal on the table would still leave current shareholders in Caesars Entertainment with just 6% of the company. And with overall operations in decline the earnings multiple investors will pay isn't very high.

There are certainly some signs of strength at Caesars Entertainment with CEC's revenue and EBITDA rising and CEOC's bankruptcy moving closer to being resolved. But the business overall still saw revenue decline and the bankruptcy process isn't resolved yet. Betting on Caesars Entertainment isn't something I would do given the risks and opportunities in lower risk competitors today.