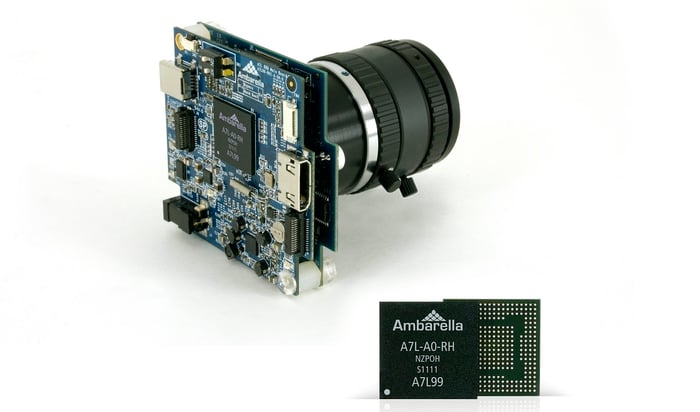 More specifically, GoPro's quarterly revenue fell 39.9% year over year, to $240.6 million, well below analysts' consensus estimates for $314.1 million. To blame, according to GoPro CEO Nick Woodman, were "production issues that resulted in lower-than-expected launch volumes" for both its new HERO5 Black camera and Karma drone -- two products in which Ambarella's chips have presumably found a home. Woodman also warned, "[W]e anticipate difficulty catching up to meet forecasted demand during the fourth quarter."

What's more, GoPro followed that report earlier this week with a recall of roughly 2,500 Karma units -- representing all of the drones it has sold since Karma's launch less than a month ago -- after an unidentified problem caused a select few units to lose power mid-flight.

And because Ambarella is a key supplier to GoPro, the two companies' results have been inextricably linked in the minds of investors. Ambarella shares would often rise or fall in tandem with what GoPro had to say each quarter -- a relatively unsurprising pattern considering that, before last year, Ambarella collected as much as 30% of its total annual revenue from the action camera specialist.

But things are quite a bit different now.

As demand for GoPro's aging camera lineup began to wane last year, causing its revenue to plunge and inventory to pile up, earlier this year Ambarella management confirmed that weakness in the wearable camera market was stifling its own ability to grow and that revenue from GoPro as a percentage of total sales had fallen to the low single digits. As such, Ambarella in recent quarters has opted to take a more conservative view to modeling chip sales from the wearable camera market until visibility improves.

The situation was looking up as of Ambarella's last quarterly report in September, when the company not only beat expectations on both revenue and earnings but also forecasted a return to year-over-year revenue growth for the holiday season. However, Ambarella management subsequently indicated that this growth in the current quarter should arrive not primarily with the help of wearable sports cameras, but rather in spite of continued weakness in that segment.

While future revenue was impacted by the wearable sports camera market and Sony sensor supply issues, we expect to retain some growth in Q3 [...] for the holiday season. With strong design momentum in security IP cameras, home monitoring cameras, and with new opportunities in the OEM automotive and the virtual revenue applications, we believe we are well positioned for continued growth driven by multiple markets.

In other words, Ambarella is finally enjoying strong-enough momentum in its supplementary markets that it's able to achieve modest growth even without the helping hand of its previous bread-and-butter wearables segment.

At the same time, that's not to say Ambarella would complain if wearables rebounded as many investors have come to hope. But GoPro's recall and production issues certainly won't do Ambarella any favors to that end. I won't be surprised, then, if Ambarella continues to opt for its decidedly cautious view of the wearable camera market going forward. But in the meantime, I'm not convinced GoPro's weak quarter is cause for concern for Ambarella shareholders today.