The 2016 election has had a huge impact on the stock market, with many companies looking at the results of the presidential race and seeing significant changes to their business prospects. Yet for tobacco giant Altria Group (NYSE:MO), rival Reynolds American (NYSE:RAI), and other cigarette manufacturers, the bad news on Election Day came not from the federal elections but rather on the state front, where a major ballot initiative in California will send tobacco taxes soaring and potentially begin a new offensive among states across the nation to impose heavier levies on cigarettes. 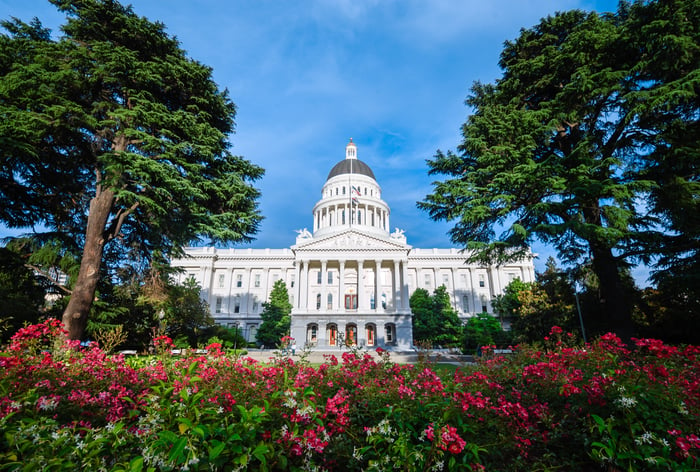 What California did to big tobacco

California Proposition 56 sought to impose massive tax increases on cigarettes and other tobacco products. The revenue from the tax would go primarily to increase funding for healthcare programs, as well as for tobacco use prevention and control programs, tobacco-related disease research, law enforcement, physician training, and dental disease prevention programs. To the extent that the measure reduced tobacco consumption, California would transfer tax revenue to programs already supported by the existing excise and sales taxes on tobacco products.

Proposition 56's impact will be substantial. The measure raises the cigarette tax by $2 per pack, more than tripling the tax from its current level of $0.87. In addition, the measure will impose similar tax increases on other tobacco products, as well as electronic cigarettes that contain nicotine.

Supporters of the proposition made arguments similar to what consumer advocates have made in the past. They pointed to potential health benefits from encouraging quitting and preventing young people from starting to smoke. They also noted the focused impact of imposing what in essence becomes a user fee, and the specific inclusion of e-cigarettes would serve an additional public policy purpose of stopping Altria and others from using the traditional cigarette alternative as an end-run around regulation.

Meanwhile, opponents of the proposition argued that the tax only transfers money from consumers to health insurance companies, with the official argument against the proposition saying that wealthy special interests wrote the proposition in order to boost their reimbursements from Medi-Cal patients. Pointing to other high-priority items like schools, roads, and crime, opponents believe that targeting big tobacco is the wrong way to go about solving real social problems in the state.

In the end, California voters supported the proposition, voting 63% to 37% in favor of the tax. That's bad news for Altria and Reynolds American, because the California cigarette market is the second-largest in the nation and makes up about 8% of the U.S. cigarette market by volume.

What's coming down the road for Altria and Reynolds American?

One big problem is that this might well be just the beginning of a new offensive among state governments against Altria and Reynolds American. In this election year, three other states had ballot measures that would have had similar negative impacts on the tobacco companies. In Colorado, voters rejected Amendment 72 by a 54% to 46% margin, which would have boosted cigarette taxes by $1.75 per pack. Missouri had two separate measures, with both a constitutional amendment to raise the tax from $0.17 to $0.77 per pack and a proposition for a smaller increase to $0.40 per pack failing to gain voter approval. North Dakota's Statutory Measure 4 would have taken the cigarette tax from $0.44 to $2.20 per pack, but it was defeated by a 62% to 38% margin.

Indeed, investors are already nervous about the prospect. Altria stock is down 6% in the two days since the election, and Reynolds American has fallen by 5%. Given the market's overall gains, those declines look even more troubling. The companies have clearly acknowledged the problem, with a spokesperson for Reynolds American confirming that future initiatives are one path that state governments could continue to take.

For now, Altria and Reynolds American will have to see what impact the California measure has on their financial results. If California generates substantial amounts of revenue from the tax, then it's entirely possible that other states that are sympathetic to the anti-smoking cause will follow suit, putting more pressure on big tobacco's financial prospects going forward.