Shareholders of Novavax (NASDAQ:NVAX), a clinical-stage biotech focused on vaccines, took it on the chin once again in October. Shares fell by more than 26% during the month, according to data from S&P Global Market Intelligence. 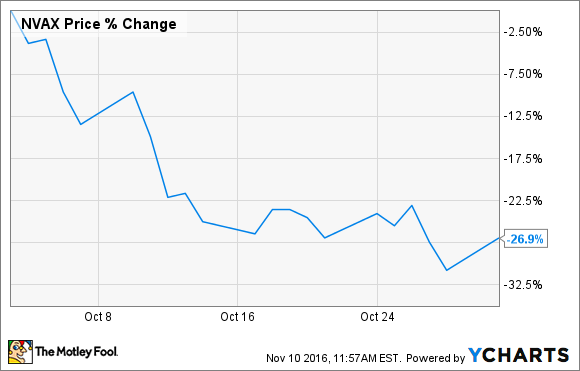 There wasn't a lot of new information released during the month that could explain the large drop. The only press releases to come out of Novavax during October were the announcement that it would be holding an investor and analyst day on Oct. 11 and the rescheduling of the event a few days later so that it would coincide with the company's third-quarter earnings release. Management said that it wanted more time to lay out the next steps for its RSV-F Vaccine program after the disappointing results from the Resolve trial were announced back in September.

The head fake likely didn't help to rebuild investors' confidence that there is still a bull thesis left for Novavax, but I have my doubts that this was the sole cause of the decline. Instead, my guess is that more and more shareholders continue to question the long-term viability of this business, which is why the stock's volatility continues to remain high.

During its third-quarter earnings report, Novavax laid out its new plan. Here are the details that investors need to know:

As of the end of September, Novavax had $300 million in cash, which it believes will be enough to execute on this plan.

Will this plan work? Only time will tell, but given that the company's future is still completely dependent on the success of its RSV vaccine, I'd suggest that potential investors proceed with caution.