Sure, the stock market as a whole may be hitting all-time highs, but even today there are stocks that look pretty cheap even in what some might call an inflated valuation market. Companies that may not have met earnings expectations lately, have lowered guidance, or are in middle of a major transition are starting to look cheap. Three stocks the really stick out as inexpensive but also look to be solid investments are Verizon Communications (VZ -1.86%), BorgWarner (BWA -1.34%), and Gilead Sciences (GILD -0.34%). Here's a look at why these three stocks are cheap today, and why they could be good long-term additions to your portfolio.

Wall Street is bearish on this biotech's pivot

There have been a few setbacks recently for Gilead in both its existing suite of marketed treatments and those in the pipeline. After posting tough third-quarter results that showed sales of its hepatitis C (HCV) drug Harvoni falling big time while its other HCV treatments haven't quite picked up the slack, management announced that the existing treatments in the pipeline are the last ones. Likewise, the company's suite of treatments for HIV had mixed results, as its newer treatments couldn't quite make up for the declines in its older drugs. That is a pretty monumental change considering that HCV and HIV treatments have been the real workhorses for Gilead's earnings for years now. The market has not responded well to the news lately, and today shares of Gilead trade at a very modest enterprise-value-to-EBITDA of just 5.7 times.

If Gilead's treatments for HCV and HIV were all the company had left in the tank, then certainly today's stock price would make sense. However, the company has made some headway in the market for treating nonalcoholic steatohepatitis (NASH). It's newest treatment has passed phase 2 trials, and promising mid-stage results from two other NASH treatments could provide a strong toehold in the potential $40 billion market.

Then, there is that $31 billion in cash on Gilead's balance sheet. While a large chunk of that could be used to boost shareholder returns, Gilead is also using it as an opportunity to add to its portfolio through acquisitions, particularly in oncology.

So Gilead may be hitting a rough patch right now as it starts to pivot away from its tried-and-true treatments, but there is still plenty of dry powder in both its own pipeline of new treatments and its stash of cash to make a opportunistic move in the future. Investors may not get much out of this stock over the next few quarters, but buying shares today looks to be a pretty attractive long-term bet on a well-established biotech. 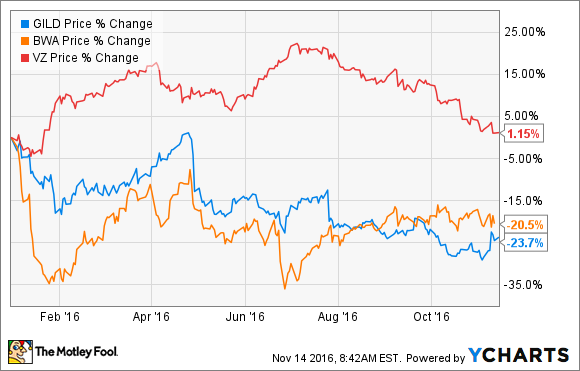 A tough hurdle to overcome today, but a big opportunity ahead

Like Gilead, automotive parts manufacturer BorgWarner foresees a bit of a rough patch. Earlier this year, the company lowered guidance as it was starting to see some signs that automotive manufacturing was at or near the top of the industry cycle and some issues with diesel engines (BorgWarner's largest client is VW/Audi, which used turbochargers in its diesel engine vehicles). If you look beyond some of these issues, though, there are some big bright spots worth pointing to that could fuel a major rise in BorgWarner's business.

The push into hybrid and fully electric vehicles has opened up a new, fast-growing market for BorgWarner. Between now and 2023, the combination of the growth of hybrid and electric vehicle sales with the company's efforts to increase the average content per vehicle should lead the hybrid and the electric markets to generate compounded annual growth rates in the 50% to 55% range. That, on top of single-digit growth for conventional combustion vehicles, should provide a strong platform for growth over the next decade.

Since Wall Street can't really see that far into the future, its focus on today's results means that shares of BorgWarner have a enterprise-value-to-EBITDA ratio of a relatively modest 6.2 times. The company may not generate much in terms of sales or profits from its hybrid and electric vehicle parts offerings today, but the growth of these vehicles over time will be a boon for the business, and that makes today's price look like a great time to jump in.

With each passing day, we become more and more tethered to mobile devices. That also translates to greater demand on wireless networks to meet our data demands at faster and faster speeds. That, of course, requires immense amounts of capital spending, and few companies in the wireless business generate the kind of cash that Verizon Communications does to develop the next big thing in wireless: a 5G network.

Over the trailing 12 months, Verizon has generated more than $28 billion in cash from operations, giving it ample cash to reinvest back into the business while leaving the company plenty left over to pay a generous dividend. It should even be noted that $28 billion in cash from ops is one of the lowest amounts of cash the company has poured several billion into working capital. While Verizon has made some slightly head-scratching acquisitions, with the purchase of AOL and a bid for Yahoo! to boost advertising revenue, the real-cash generating workhorse of this company is its wireless subscriptions.

The company did just recently miss some subscriber targets in its most recent earnings release, but this is somewhat expected as competition among wireless providers ramps up. As Verizon starts to differentiate itself with its 5G network -- expected to be online in 2020 -- and continues to pay down debt from its buyout of Vodaphone's interest in the company back in 2014, Verizon should continue to crank out solid cash to reward shareholders. With a stock that has a total enterprise-value-to-EBITDA of 6.5 times, that's a pretty compelling investment.

Tyler Crowe owns shares of Gilead Sciences. You can follow him at Fool.com or on Twitter @TylerCroweFool.

These 2 Stocks Are Ridiculously Cheap