News that Donald Trump won the presidential election last week has sent bank stocks surging across the board, with the KBW Bank Index up nearly 13% since last Tuesday's close. But even though this performance has been broad-based, few banks stand to gain as much from a Trump presidency as Citigroup (NYSE:C).

Short- vs. long-term benefits to Citigroup

If you've been following Citigroup's stock performance over the past week, this may surprise you. I say that because shares of the nation's fourth biggest bank by assets are lagging those of its peers. While the KBW Bank Index is up almost 13% since last Tuesday, Citigroup's stock is up only 9%.

Before its shareholders get disappointed, though, it's worth pointing out that the New York-based bank is still creaming the broader market, which is up only 1% over the same stretch. 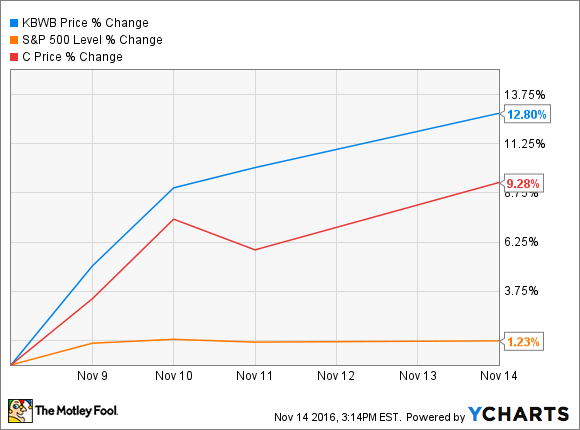 But just because Citigroup has lagged its big-bank peers since the election results were announced doesn't mean it will continue to underperform them. In fact, I think there are reasons to believe it will more than make up for the difference over the next year.

Why Citigroup has so much to gain

Over the long run, Citigroup has the most to gain if Trump follows through on his campaign platform. Its shares currently trade for the lowest valuation among blue-chip bank stocks, priced at a 27% discount to book value. Meanwhile, the discount on Bank of America's shares is a more reasonable 18%. And both JPMorgan Chase and Wells Fargo's shares trade for premiums to their book values -- at 24% and 48%, respectively, according to data from Yahoo! Finance.

Additionally, Trump's promise to reduce regulations on the financial industry, and to roll back the Dodd-Frank Act in particular, should be particularly beneficial to Citigroup. Thanks to regulations passed pursuant to Dodd-Frank, the megabank must currently hold more capital relative to its assets than any other bank but JPMorgan Chase. Because this reduces the amount of leverage Citigroup can use relative to its peers, it also means the bank must work even harder than competitors to generate the type of profitability investors expect from a bank its size.

Trump hasn't come out and said specifically that he intends to reduce capital requirements on banks, but if you read between the lines, that's essentially what he means when he says banks aren't loaning as much as they otherwise might under a less strict regulatory environment.

Finally, if Trump's administration eliminates or dials back the annual stress tests big banks must undergo, this will also be distinctly beneficial to Citigroup. Among other things, the stress tests give regulators the authority to veto big bank capital plans -- i.e., how much they return to shareholders via dividends and stock buybacks.

Citigroup has struggled more than most banks to appease regulators in the past on this front, having requests to increase its dividend denied repeatedly over the past six years. The net result is that Citigroup pays out a smaller share of its earnings by way of dividends than any other major bank. Its payout ratio is currently only 6.5%, which is half as much as Bank of America's 16%, and even less than that of JPMorgan and Wells Fargo's plus-30% payout ratios.

It remains to be seen whether the stress tests will in fact be affected in this way, but if they are -- and it isn't unreasonable to think they could be -- then Citigroup could scale up its dividend faster and to a greater degree than any other big bank. This would almost certainly stimulate its share price.

Thus, even though Citigroup's shares haven't risen as much since the election as they have at Bank of America, JPMorgan Chase, and Wells Fargo, investors in Citigroup should feel confident that it's likely to close the gap as time passes.