Steve Symington, Evan Niu, CFA, Neha Chamaria, Daniel Miller, and Todd Campbell
(XMFSymington)
Author Bio
As a technology and consumer goods specialist for the Fool, Steve looks for responsible businesses that positively shape our lives. Then he invests accordingly. Enjoy his work? Connect with him on Twitter & Facebook so you don't miss a thing.

The concept of beating the market by investing in individual stocks is easy to understand. But actually finding the best stocks at an attractive price is easier said than done. To help get you started, we asked five Motley Fool contributors to each pick a stock they believe investors would do well to purchase right now.

Cheers to a delicious turnaround

Steve Symington (Boston Beer)
Boston Beer doesn't seem to be in the most enviable position at first glance. Given the confluence of increasing competition and a slowdown in the craft-beer industry, the company lost market share in each of its past four quarters.

But with its shares down 45% from their early 2015 highs, including a 13% decline so far in 2016 as of this writing, I think Boston Beer has suffered more than enough for the state of its still-solidly profitable business. And more importantly, there's a sense the worst is over for the leading craft brewer.

In particular, according to Boston Beer's founder and chairman, Jim Koch, retailers are actually cutting SKUs. So, Koch says, the company is finally seeing the "end of a long phase of constantly increasing shelf space. And as a result, there is a high likelihood that we will benefit as will other leading craft brands -- the stronger brands that are going to benefit from removing some of the confusion from the category."

In short, retailers are taking a less-is-more approach to stocking the beer aisle and have realized that adding even more variety isn't benefiting overall sales for the category. As such, while that doesn't mean smaller brewers are going away, more established, familiar brands such as Boston Beer should gain ground.

Speaking of which, after a comprehensive review of the its brand messaging and packaging last quarter, Boston Beer also just began shipping a "major packaging update" for its core Samuel Adams Boson Lager variety. That update should be followed by new seasonal and Rebel IPA packaging by the end of the year, which should help bolster sales as consumers receive a fresh view of this well-known brand.

In the end, for long-term investors willing to take advantage of Boston Beer's dip, I think now is a great time to buy.

Todd Campbell (Chicago Bridge & Iron)
This U.S. infrastructure company could be about to enjoy a renaissance following the election of Donald Trump as the next U.S. president.

Chicago Bridge & Iron, or CB&I, is a major energy and water engineering company that manufactures, builds, constructs, and manages projects, including energy terminals and wastewater facilities.

The company operates globally, but the U.S. accounts for about 70% of its sales. That suggests that if Trump can persuade Congress to back his infrastructure goals, CB&I's project backlog could be about to spike.

Admittedly, lower energy projects have slowed CB&I's growth lately, but the company remains nicely profitable. Last quarter, CB&I's EPS was $1.20, and next year, industry watchers think CB&I could earn $4.54. Next year's estimate means that CB&I's shares are trading at less than 7 times forward EPS. However, if rising infrastructure spending leads analysts to move their forecasts higher, then this company could be even cheaper than that.

Overall, CB&I already makes money, and it could make even more money if Trump gets his way. Since its shares are arguably underpriced, this company has become tremendously intriguing to me.

Another way to benefit from a Trump victory

Daniel Miller (U.S. Concrete)
Naturally, I would pick this stock right before it jumps 10% during Thursday trading, but even despite the pop, U.S. Concrete still trades at a modest forward price-to-earnings ratio of 15, according to estimates from Morningstar. 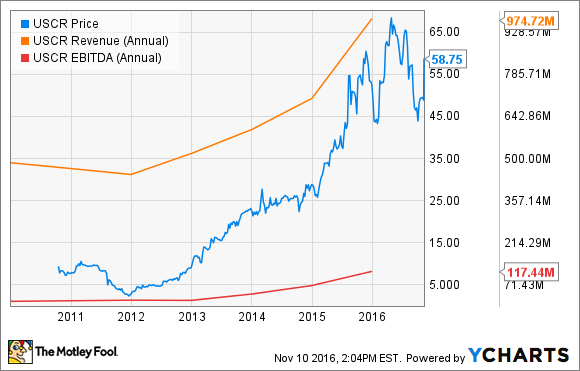 U.S. Concrete sells ready-mixed concrete and aggregates (materials that go into concrete) and enjoys a low-cost position among its peers. The company sells a little over half of its ready-mixed concrete volume to the nonresidential commercial sector, which stands to benefit from increased commercial construction, including highways, streets, and other public works.

Originally, I came across U.S. Concrete months ago in my attempt to uncover stocks poised to benefit from an inevitable surge in infrastructure spending -- it's only a matter of when, not if. Fast-forward to this week, and Donald Trump's surprise victory has sent a boost of optimism through stocks just like U.S. Concrete because of his promise to fix our bridges and roads, among other things.

Looking more closely at U.S. Concrete's business, we see it holds a leading market share in some very enviable and important markets, including Texas, Northern California, and the New York metro area. Additionally, U.S. Concrete has acquired nearly 20 small companies over the past two years, yet it maintains a manageable balance sheet, which could help fuel top- and bottom-line performance as the company creates synergies and takes advantage of potential commercial and public construction under a Trump presidency.

The social network is cheaper than it looks

Evan Niu, CFA (Facebook)
With shares only about 10% off from recent all-time highs, Facebook may not appear to be on sale. But trust me: It is. Investors weren't too pleased with the social network's third-quarter earnings release, but not because the company's performance was lacking. On the contrary, Facebook continues to grow its global user base (1.79 billion) as well as execute on its mobile business (84% of advertising revenue). Net income also soared by nearly 170% to $2.4 billion.

But investors were overly concerned about Facebook's guidance for the coming year, since the company said revenue growth should decelerate slightly as it hits a limit on a comfortable ad load, combined with increased spending and investment. But almost an identical storyline played out two years ago, and I think the negative reaction is overdone and will also prove to be a buying opportunity in disguise.

Additionally, a wide range of tech stocks have been under pressure following Trump's election victory because of uncertainty about how the president-elect will treat Silicon Valley, after most Silicon Valley leaders very vocally opposed Trump's candidacy. While those uncertainties and risks remain, as should some volatility, Facebook has an incredible business and continues to execute incredibly well. Investors with long time horizons know that it's precisely times like these when you can make volatility work in your favor by picking up shares of great companies at compelling prices.

This chemical stock offers a nice mix of value, growth, and income

Neha Chamaria (Dow Chemical)
With uncertainty reigning after Trump's surprising victory, I'd be hunting down value stocks like Dow Chemical that are not only trading cheap but also offer good growth potential in the long run. Shares of the chemical conglomerate are going for only 8 times trailing earnings and offering a strong dividend yield of 3.4% currently.
While Dow's primary business of petrochemicals isn't immune to cyclical risks, the company is among the largest in its industry, with a strong record of growing margins and shareholder returns. Management's three-pronged approach of expanding high-margin businesses via acquisitions, divesting low-profitable assets, and securing long-term low-cost feedstock should position Dow favorably even during difficult business conditions.

Perhaps Dow's biggest growth initiative is its impending merger with DuPont to create the world's largest agricultural chemicals and second-largest materials company. The merger, however, has just hit fresh regulatory hurdles. That might make investors wary, but it's important to remember that Dow has proven its mettle over the decades and should still enjoy good growth potential backed by its foothold in the industry even if the merger falls through. For instance, consider Sadara -- Dow's joint venture with Saudi Aramco to build the world's largest petrochemical facility.  The $20 billion project is near completion and has the potential to unlock substantial value for shareholders in coming years.
Long story short, given management's balanced growth strategy and commitment to shareholders – Dow has doubled its dividend since 2010 – I believe now is good to consider the stock.
This article represents the opinion of the writer, who may disagree with the “official” recommendation position of a Motley Fool premium advisory service. We’re motley! Questioning an investing thesis -- even one of our own -- helps us all think critically about investing and make decisions that help us become smarter, happier, and richer.