Please ensure Javascript is enabled for purposes of website accessibility
Log In Help Join The Motley Fool
Free Article Join Over 1 Million Premium Members And Get More In-Depth Stock Guidance and Research
By Dan Caplinger - Jul 25, 2019 at 10:50AM

The stock market gave up ground on Thursday as investors reacted to a large number of companies reporting earnings, as well as macroeconomic issues around the world. With dovish comments coming from European central bankers, most expect the Federal Reserve to follow suit next week with rate cuts of its own. As of 10:40 a.m. EDT, the Dow Jones Industrial Average (^DJI 0.00%) was down 67 points to 27,203. The S&P 500 (^GSPC -4.04%) lost 6 points to 3,013, and the Nasdaq Composite (^IXIC 0.00%) gave up 41 points to 8,280.

Earnings have been a big part of what's moved the market over the past couple of weeks, and some high-profile names delivered their most recent reports to give investors a chance to react. For Tesla (TSLA -6.80%), a significant drop stemmed from losses that were bigger than shareholders wanted to see -- even though they've started to show signs of improvement. Meanwhile, Facebook (FB -5.12%) confirmed that it'll pay a huge fine to regulators, and although the stock isn't suffering, further investigation of the social media giant is likely.

Shares of Tesla plunged almost 13% after the electric vehicle manufacturer reported its second-quarter financial results. Despite some signs of growth, the numbers were generally disappointing. Revenue jumped 59% to $6.35 billion, but that wasn't quite as big a rise as investors had anticipated. Meanwhile, an adjusted loss of $1.12 per share was significantly larger than the $0.36-per-share loss analysts had expected, even though it was a welcome reduction in red ink compared to much worse performance a year ago. 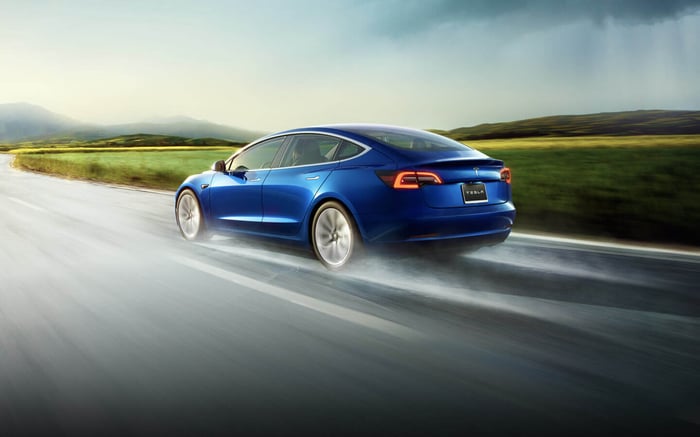 Tesla saw immense growth in delivery counts during the period. The company reported a 134% rise in overall vehicle deliveries, but because a much larger proportion of those vehicles were lower-cost Model 3s, revenue gains were more modest. The Model 3 made up more than four out of every five of the more than 95,000 vehicles that Tesla delivered during the second quarter.

Investors were also unhappy to discover that Tesla co-founder and Chief Technology Officer J.B. Straubel will leave the company. Even though Straubel will continue to advise CEO Elon Musk and the company on an unofficial basis, past concerns about top executives fleeing Tesla have made investors suspicious anytime someone else leaves.

Shareholders are bearish about Tesla right now, but from a longer-term perspective, the car company still appears to be on course. The pace might not be as quick as investors would prefer, but signs of real growth are a long-term positive for Tesla.

Shares of Facebook were volatile Thursday morning, initially rising 1% but giving up those gains later in the morning session. The social media giant reported second-quarter financial results that were generally stronger than most had expected, but the company also faces continuing regulatory challenges that have long-term implications for its growth.

On one hand, Facebook's results were solid. Revenue jumped 28% from year-ago levels, and after accounting for extraordinary items, adjusted earnings per share climbed 14% year over year. Active user counts were up 8%, and Facebook saw exceptionally good results from its mobile advertising business.

Yet most investors seemed focused on the challenges that Facebook is dealing with. Not only will the social media specialist have to pay a $5 billion fine to the Federal Trade Commission, but it also revealed that a new FTC investigation will look at potential antitrust violations by Facebook. That only increases the number of agencies around the world that are looking at the company's practices.

From a business standpoint, Facebook is executing extremely well. If it can rescue its damaged reputation and keep regulators at bay, then the social media leader's stock could finally start to get the respect it deserves.

Stock Market News: Why Tesla and Facebook Are Soaring