It's now been a week since Donald Trump was elected President of the United States, and the rally in bank stocks is in full swing.

So far, The Wall Street Journal reports that the "KBW Nasdaq Bank index" is up "around 14%." Individual bank stocks are doing even better, with giant Bank of America (NYSE:BAC) up 18% in a week. As the Journal joyfully proclaimed, there's a new enthusiasm for "banks as growth stocks."

And yet, it's a truism on Wall Street: By the time news appears on the front page of the Journal, it's not really news anymore, and the time to profit from it has passed. And so it is that at the same time as the Journal is proclaiming the return of bank stocks to prominence, Wall Street bankers themselves are declaring the rally over. 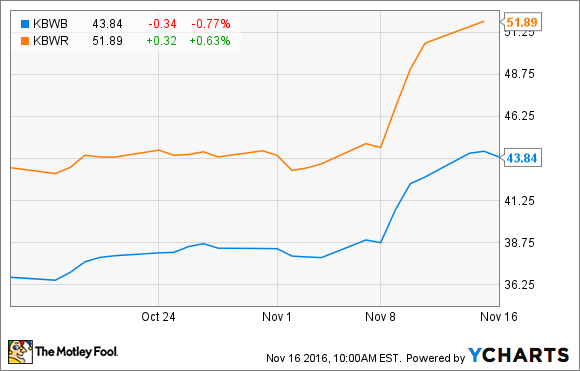 Beginning with the highest-profile downgrade of the day, well-regarded R.W. Baird (CAPS rating: 90.51) announced this morning that it is pulling its buy recommendation from Bank of America stock, and downgrading the shares to neutral. As explained in a write-up on TheFly.com, Baird believes that "the post-election rally has largely discounted the potential benefits of rising interest rates, lower taxes, and more aggressive capital return" under a Trump administration.

Nor is Bank of America the only stock on Baird's chopping block. Among its other downgrades, one that stands out is Baird's drastic ratings cut of Fifth Third (NASDAQ:FITB) stock to underperform. In addition to citing the same concerns that scared it out of B of A stock, Baird warns that Fifth Third stock is already pricing in the benefits of Fifth Third's "Project North Star efficiency program," leaving little room for profits improvement -- and leaving the stock looking overpriced.

Analysts at Bernstein (CAPS rating: 96.41), too, are taking an axe to Fifth Third stock, downgrading to market perform, and pointing out that it's not just the Trump effect at work here. Bernstein notes that "mid-cap bank stocks have risen 33% since their June trough." What's more, the stocks' prices aren't tracking improvements in earnings so much as mere "multiple expansion." Bernstein says it "struggles to find compelling upside" in any regional stocks today. For this reason, Bernstein added KeyCorp (NYSE:KEY) to its hit list, downgrading that one to market perform as well.

And then there's Piper Jaffray (CAPS rating: 87.24). Judging from the list of downgrades Piper announced this morning, it looks like just about every stock with "bank" (or "banc") in its name got downgraded today. This includes everyone from well-known Regions Bank (NYSE:RF) -- cut to neutral on concerns it  has come "too far, too fast" -- to less famous banking players such as People's United Financial (NASDAQ:PBCT), which Piper now rates underweight, saying it is time to take profits.

The most important thing: Patience

So who is an investor to believe in this brave new world for banking stocks? The venerable Wall Street Journal, or the bankers themselves? That's hard to say. On the one hand, the Journal is right to point out that even after their rally, most bank stocks sells for discounts to the stock market as a whole, and significant discounts to their own book values as well.

Traditionally, investors have viewed bank stocks as bargain-priced whenever they trade below book value. From that perspective, you have to admit that Bank of America looks kind of cheap at a current valuation of just 0.82 times book value. On the other hand, Regions is coming close to fair value at 0.99 times book, while valuations at People's Financial (1.15 times book), Fifth Third (1.23 times), and KeyCorp (1.31 times), are all starting to look a bit stretched.

Sure, if growth returns to the banking sector under a President Trump, it's possible these banks will grow into their valuations in a few years' time -- but that remains to be proven. For now, the best move may be to heed the warnings of the folks who know banking stocks best: The bankers themselves.