Ever since news of the Wells Fargo (NYSE:WFC) "fake account" scandal broke, there has been much speculation about whether the bank's largest shareholder, Warren Buffett's Berkshire Hathaway (NYSE:BRK.A) (NYSE:BRK.B), would sell some or all of its shares. Well, we recently got out answer – Buffett hasn't sold a single share. Here's why.

For the past two months or so, Buffett's followers have been wondering whether he sold any of Berkshire Hathaway's 10% stake in the bank. Given Buffett's emphasis on a business' reputation, it wouldn't have come as a shock to anyone if he unloaded some or all of Berkshire's stake in the wake of the scandal. As he said in 1991, "Lose money for my firm and I will be understanding; lose a shred of reputation for the firm, and I will be ruthless."

To the surprise of many, Buffett recently revealed that Berkshire's entire stake in the bank remains intact. Not a single share has been sold.

In a recent CNN interview, Buffett admitted that the bank had made a "terrible mistake" by implementing an incentive system that was based on getting customers signed up for as many accounts as possible, whether they needed them or not. He said that Wells Fargo's sales goals corrupted people and produced bad behavior, and that management should have stepped in to stop it.

He characterized former Wells Fargo CEO John Stumpf as a "very decent man" who "made a hell of a mistake." Buffet himself called Stumpf after news of the scandal broke, and warned him that the situation was much more serious than Stumpf seemed to think it was. He did say that replacement CEO Tim Sloan was a smart choice, but that it would take time for him and the rest of Wells Fargo's team to restore the public's trust.

Buffett is sticking with Wells Fargo, calling the bank an "incredible institution," and said that Wells Fargo is not the only company he invests in that has problems. Just to name a couple, Berkshire subsidiary Clayton Homes has been the subject of criticism over its mortgage practices, and major Berkshire stock holding American Express plunged after it lost its Costco co-branding relationship in 2015.

In these cases, as well as with Wells Fargo, Buffett clearly feels that the good outweighs the bad, especially when it comes to long term potential.

Wells Fargo abruptly stopped its questionable sales practices after the scandal, and has taken steps to produce a healthier sales culture. The 5,300 employees who participated in the scandal have been fired, and the bank no longer imposes any product sale requirements on its retail bankers.

Buffett's main reasons for investing in the bank in the first place still apply. Wells Fargo has higher-quality assets and consistently runs a more profitable and efficient operation than its competition. Just look at the bank's return on equity (ROE) and return on assets (ROA) profitability metrics as compared to the rest of the "big four" U.S. banks. 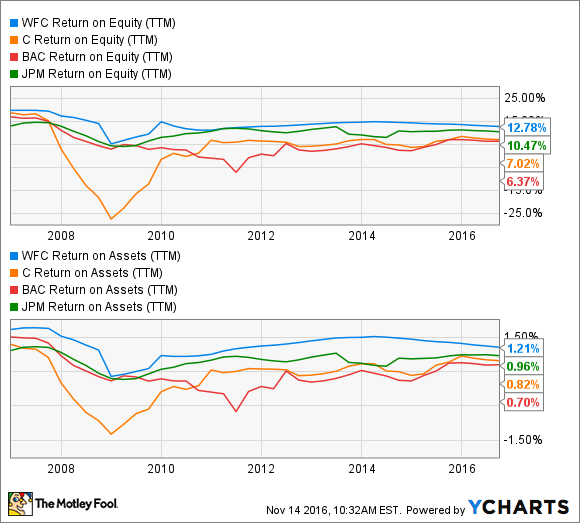 Even after the $185 million fine imposed for the fraudulent account scandal, Wells Fargo is still the least fined out of the big four. In fact, if you add up all the fines paid by the four banks since 2009, Wells Fargo is a distant fourth, trailing the next closest bank (Citigroup) by almost half.

Still a buy after the Trump rally?

Since Donald Trump has been elected president, Wells Fargo and most other banks have rallied sharply. In fact, less than a week after the election, the stock is up 18%. Buffett wasn't a Trump supporter by any means, but Berkshire's stake in Wells Fargo has gained nearly $4 billion in value thanks to his election (and the Republican control of both houses of Congress). Obviously, Wells Fargo isn't as attractive as it was earlier in November. 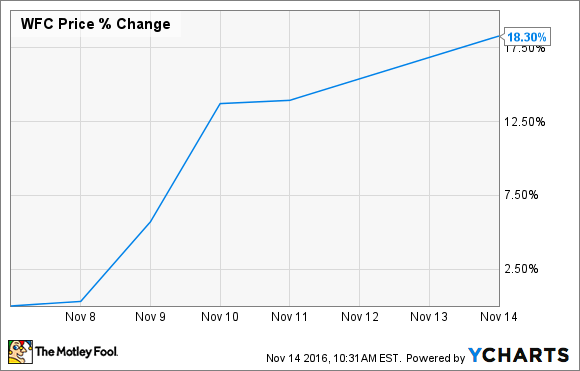