This month has been a great one in which to own stock in TASER International (NASDAQ:AXON) -- but the good times may not last.

When TASER reported earnings last Friday, the stock enjoyed an immediate 18% pop as investors cheered news of 43% revenue growth and a doubling of net income. It didn't take long, however, for the enthusiasm to wear off. In fact, that very day investors got their first indication that a suddenly more expensive TASER stock might have become too expensive to invest in, as analysts at Imperial Capital announced a downgrade on the stock. 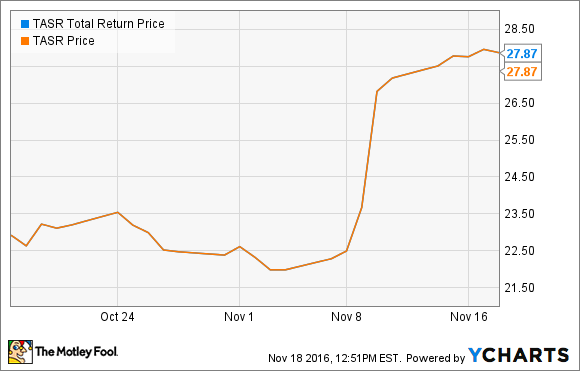 As reported on StreetInsider.com, Imperial Capital cut its rating on TASER stock from "outperform" to "in-line" (i.e., "hold"). At the same time, though, the analyst left its $27 price target on the stock intact.

Imperial explained: "[W]e continue to believe that TASER's unaided brand awareness, very high market share, and its business model [give] it significant leading advantage over competitors in non-lethal weaponry, and the developing business of online forensics and evidence management." I must say, that doesn't sound particularly downgrade-y to me. So why did Imperial change the rating at all?

Why Imperial did it

I think the key here lies in Imperial's $27 price target, and the fact that the analyst didn't change that despite changing its rating. As you can see in the chart above, prior to earnings, TASER stock had spent several weeks trading in the $22-per-share range. In fact, on Oct. 14, when Imperial Capital first initiated coverage on TASER and assigned its $27 price target, the stock still cost less than $23. That gap between $23 price and $27 worth looked like an opportunity to Imperial.

Aside from the stock price, little has changed about TASER's business in the four weeks since Imperial first started coverage. So my guess is that Imperial cut its rating on TASER simply because it had hit its price target -- and Imperial will very likely re-recommend buying TASER if the stock falls much below $27.

Why might that happen? In its original October write-up, Imperial highlighted several reasons that it likes TASER. These include the brand awareness, market share, and razor-and-blade business model, all noted above.

In addition, Imperial pointed out that the 70% gross profit margins that TASER earns on its stun-gun hardware "rival those of many software companies." The analyst also likes the fact that much of this high-margin revenue is "recurring," with customer purchases of stun-gun cartridges, batteries, and payment of warranty premiums securing fully 33% of the company's annual revenue stream -- even without sales of any new stun guns whatsoever.

Granted, TASER's Axon body-camera business doesn't currently enjoy such high margins. But it is growing quickly, and as recurring revenues from data storage and analysis (via its service Evidence.com) make up larger and larger proportions of the Axon revenue stream, this business also has the potential to produce profit margins on par with stun guns.

Long story short, Imperial is probably right that after its recent spike in price, TASER shares are no longer cheap enough to buy. (After all, according to data from S&P Global Market Intelligence, the stock now sells for 45 times free cash flow, and 96 times earnings). But TASER's business is still booming. At the right price, TASER stock could become a "buy" once again.