Oil prices rallied this week, ending Friday up more than 3% on renewed hope that OPEC members would come to a deal to cut and cap crude output. That ended a run of four straight weekly declines and ignited a rally in oil stocks. That said, rising crude prices were far from the only catalysts driving oil stocks higher this week, and the biggest gainers each had company-specific positives that accelerated their rallies. Those stocks, according to data from S&P Global Market Intelligence, were Western Refining (NYSE:WNR), Aegean Marine Petroleum (NYSE: ANW), California Resources (OTC:CRC), EP Energy (NYSE:EPE), and Enerplus (NYSE:ERF): 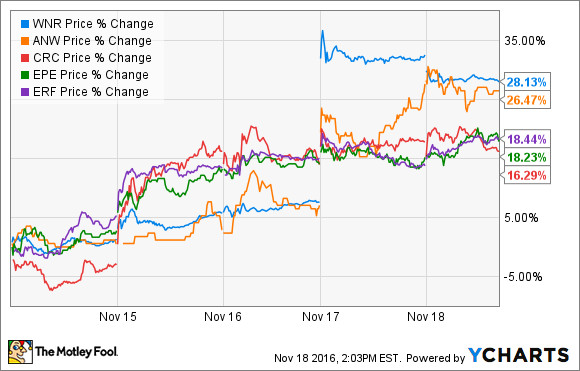 Western Refining led the way this week after fellow refiner Tesoro (NYSE:ANDV) bought it in a cash-and-stock deal that valued it at $6.4 billion. The transaction will create a refining, marketing, and logistics leader that will control 6% of the country's refining capacity. Tesoro believes that the deal will be 10% to 13% accretive to earnings per share by 2018, while driving robust growth opportunities going forward, especially for crude oil logistics assets in the Permian Basin.

Fueling Aegean Marine Petroleum's rally were its expectations-beating third-quarter results. The company earned $0.36 per share, which was $0.03 higher than the consensus forecast, due to rising oil prices and higher sales volumes. Further, the company sees the potential for stronger sales ahead due to the increase in the Baltic Dry Index, which suggests that dry bulk traffic could soon begin to grow, which would lead to more fueling opportunities for Aegean Marine Petroleum.

California Resources' stock jumped this week after George Soros revealed that he had purchased a stake in the oil producer. While Soros only opened a small position, and it was just one of several oil stocks he bought last quarter, the purchase was viewed as showing his confidence in the company's future.

While rising oil prices helped fuel EP Energy's move this week, the company also benefited from an action it took to bolster its liquidity. On Wednesday, the company announced that it was offering $350 million of senior notes due in 2023 to pay down its revolving credit facility as well as for general corporate purposes. However, thanks to healthy market demand, it upsized that offering a day later to $500 million and extended the maturity to 2024. One factor driving that demand was the fact that EP Energy's credit rating agency changed its credit outlook from negative to stable because the new notes would boost the company's liquidity and support its ability to increase capital spending next year.

Finally, Canadian oil and gas company Enerplus jumped after reporting solid third-quarter results and a positive outlook for 2017. One of the highlights of the quarter was the company's success at pushing its operating costs down 25% year over year. In addition to that, Enerplus released its preliminary guidance for 2017, saying it sees liquids production increasing by 15%, driven by 25% production growth in North Dakota. Enerplus expects to achieve that healthy growth rate while remaining within cash flow at $50 oil, thanks to its ability to cut costs.

The oil sector is starting to grow a bit more optimistic that OPEC will get its deal done, which should lead to a better oil price environment next year. That is optimism is enabling some oil companies to raise capital due to increased investor support, while others are growing more confident about releasing growth-focused forecasts. That said, there's still a concern that the OPEC deal could fall through, which would detail this enthusiasm, especially if the cartel members reverse course and unexpectedly boost output.