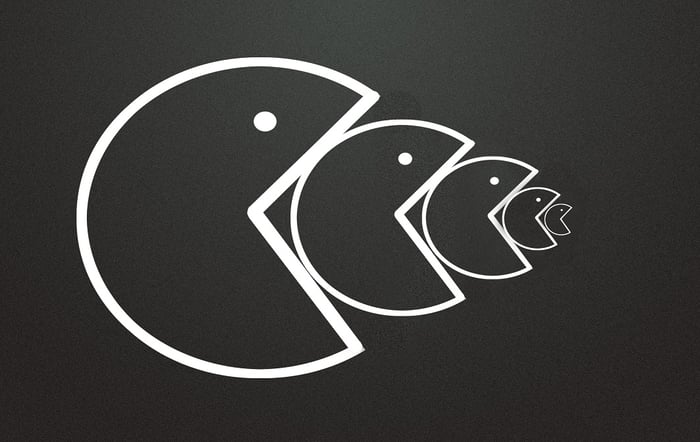 Stock buybacks, also known as share repurchases, occur when companies buy shares of their own stock to reduce the number of shares outstanding.

Stock buybacks can be used to offset stock issued to employees as compensation, or to improve earnings per share by reducing the number of shares by which earnings are divided. Sometimes, companies repurchase stock simply because they believe their shares are undervalued.

With that in mind, here are three companies buying back a lot of stock in 2016, a hint that their management teams believe the market is underpricing their shares.

A royalty on the internet split between a shrinking share count

VeriSign stock is largely a royalty company that benefits from the expansion of the internet. The company generates revenue every time someone registers a new domain name, or renews and existing one. The company is the exclusive registry for .com, .net, .gov, .edu, .tv, .cc, and .name domains, which make up the vast majority of all domains registered and renewed each year.

The best part of VeriSign's business is that it requires little in the way of reinvestment for growth. So long as it continues to stake its claim as the exclusive registrar of the internet's most popular domain names, its top and bottom lines should grow with the number of domains registered each year.

In the past twelve months, VeriSign generated $661 million in operating cash flow, and spent only $32 million on capital expenditures. With little need to invest in its business, VeriSign can use its cash repurchasing stock, its preferred tool to reward shareholders ever since its IPO in 1998.

The company hasn’t been without its share of challenges. It lost its exclusive deal with Costco to Visa and Citi in 2015. Banks, especially JPMorgan, are learning to mimic its business model by giving customers high rewards on cards that often carry large annual fees.

As other companies target its wealthier, higher spending customers, American Express is starting to steal from Discover's playbook, engaging customers who are more likely to carry a balance. If it can get back on track, its aggressive repurchase program should magnify returns for investors who stuck with the company during a period that is increasingly looking like a "rebuilding year."

Like VeriSign, Harley Davidson is also a serial share repurchaser. The company’s diluted share count has dwindled from about 265 million diluted shares in 2006 to 179 million shares as of the most-recent quarter.

But unlike VeriSign, Harley Davidson doesn't have the privilege of having an effective monopoly on its core product. The company’s motorcycles appeal mostly to aging base of older, wealthier riders. Competitors like Polaris Industries, which revived the Indian motorcycle brand, are proving to be very adept at winning over the industry's younger riders.

The impact of competition is appearing most notably at its dealerships, who have been swimming in excess inventory. “Model year 2016 carryover inventory is a much bigger percentage of the total inventory...than we would like at this point,” said Harley Davidson’s Chief Financial Officer, John Olin, on a recent conference call. The company turned to low-interest financing offers as a way to clear inventory to make room for new models.

Capturing the interest of younger and more frugal motorcyclists may be easier said than done, but shareholders will certainly benefit should it prove successful. The company repurchased 8.2 million shares in the first nine months of 2016. It has approval to buy back 20.9 million more shares under programs already approved by its board of directors.

It's only with the benefit of hindsight that a share repurchase program can be fairly judged, but the fact is that many of the best-performing companies in history have been aggressive buyers of their own stock. Henry Singleton of Teledyne was a legendary manager who skillfully used his companies' share price as a mechanism for creating value.

Through spectacular management of Teledyne's share count -- Singleton favored issuing stock when he believed it to be expensive, and buying back stock when he thought it was cheap -- he oversaw one of the best performances of any executive over his 27 year tenure. Singleton generated average annual returns of more than 20% for shareholders during a period in which the S&P 500 returned just 8%, on average.

While it's unlikely that you'll find the next Teledyne -- it really was a once-in-a-lifetime success -- outsize stock buybacks by VeriSign, American Express, and Harley Davidson suggest that their insiders believe their shares are cheap.