Goldcorp (NYSE:GG) recently reported its Q3 earnings. Although gold production decreased approximately 22% year over year, it didn't hurt the company's net income, which totaled $59 million -- quite the turnaround from the net loss of $192 million during the same period last year. But there's much more to a company's quarterly performance than just a few numbers, so let's dig in and mine the report for some of the more interesting nuggets. 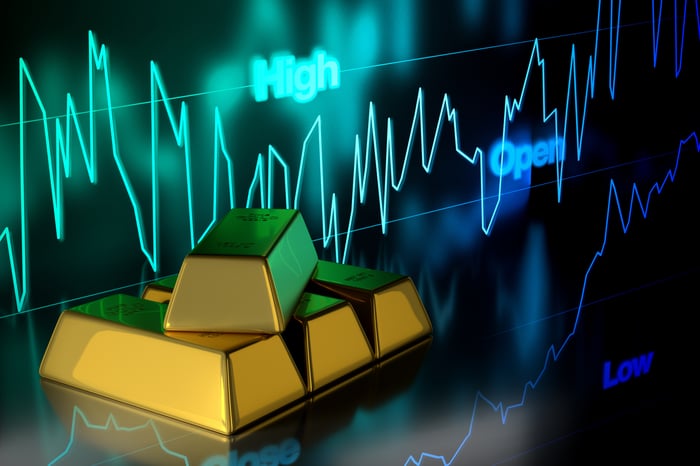 With normal operations having resumed following a 10-day maintenance shutdown in the second quarter, the Penasquito mine was expected to yield steady gold production throughout the third and fourth quarters. As Q3 began, though, gold production at Penasquito was still low -- 49% lower year over year. This time, instead of a shutdown, management attributed the low production to "lower throughput due to harder ore types processed and lower recoveries associated with processing lower grade stockpile ore."

Drops in gold production are certainly important, but with greater context, one can see why success at Penasquito is so important for Goldcorp. In Q3, for example, overall revenue decreased 17% year over year. Management indicated that this was due to a 27% decrease in gold sales volumes, which it attributed to lower production at Penasquito.

Toward the end of the quarter, higher-grade ores were accessed as expected; consequently, the mine is expected to be more productive in the fourth quarter. Based on this, management reiterated its gold production guidance for fiscal 2016: 2.8 million to 3.1 million ounces.

Costs coming back down

In line with management's expectations, all-in sustaining costs (AISC) fell sharply in the third quarter, from $1,067 per gold ounce in Q2 to $812 per gold ounce for Q3. Management attributed the improvement to lower production costs and the strengthening U.S. dollar against the Argentine and Mexican pesos -- all factors that management also credited as helping to prevent its AISC from growing higher during the second quarter.

Because of the company's success in bringing down its AISC, management affirmed its guidance for 2016: a range between $850 and $925 per gold ounce.

Management's claim that the AISC reduction is largely attributable to favorable currency exchange rates may give investors pause. After all, this is not an operational improvement, and the Argentine and Mexican pesos will surely regain value against the U.S. dollar.

But investors can take solace in the fact that some of Goldcorp's restructuring efforts are beginning to show positive results, which can assist in bringing AISC down.

At Cerro Negro, Goldcorp's second most lucrative mine, for example, there has been a reduction in the workforce by about 40% since 2015. Between this and other initiatives, management estimates that its restructuring process will "contribute sustainable annual savings of approximately $65 million in 2018."

A portfolio poised to grow

Demonstrating its commitment to expand its portfolio, Goldcorp committed approximately $1 billion in the third quarter to various projects. Most notably, the company completed the acquisition of the Kaminak Gold Corporation for a total consideration of $406 million. With the closing of the deal, Goldcorp gains the Coffee mine in Yukon, Canada. Though not currently in operation, management estimates that the mine will produce its first gold by the end of 2020 and produce an average of 200,000 ounces annually for the first five years of production.

The company doesn't intend to solely grow its portfolio through acquisitions, it is looking to grow organically as well. During the third quarter, the company began its approximate $420 million expansion at Penasquito. Management estimates that the Pyrite Leach Project will provide annual incremental production of 100,000 to 140,000 gold ounces. Expansion activities also began at the company's Musselwhite mine in Ontario. Management expects the expansion project to be completed in the first quarter of 2019, resulting in incremental production of about 20% and an approximate 10% reduction in operating costs for the life of the mine.

Lastly, Goldcorp is relying on its healthy pipeline to grow its enterprise. As of the end of the third quarter, the company has its eyes on 169 growth opportunities -- all at varying stages of development -- throughout the three countries in which it maintains operations. Besides the 112 targets in Canada, the company has 43 targets in Argentina and 14 targets in Mexico.

Yet again, this quarter proved how essential Penasquito is to Goldcorp's success. Based on its attention to its pipeline, it appears as if management is working to set the company for long-term success. Should the company successfully grow its portfolio, whether through expansion projects or through acquisition, it will certainly mitigate some of this risk.