ExxonMobil (NYSE:XOM) investors have seen the oil giant's earnings fall from nearly $10 a share in 2012 to what looks like it might be around $2 a share in 2016, if the $1.47 it's earned through the first nine months of the year is any indication and, equally important, it doesn't record any asset write downs in the fourth quarter. With a $3-per-share annual dividend, income investors would appear to have every right to worry about the dividend's ability to survive the oil downturn.

It's not getting better

Oil prices started to fall sharply in mid-2014. Since that point, every integrated oil company has suffered. And when you see a company like Exxon with earnings that are likely to fall well short of its annual dividend in 2016, you have to step back and take stock.

The first thing to remember, however, is that dividends don't come out of earnings. So the fact that the oil giant isn't going to cover its dividend payments this year isn't the end of the world. But don't stop there: You need to look at cash flow, too. That's where dividends are paid from. 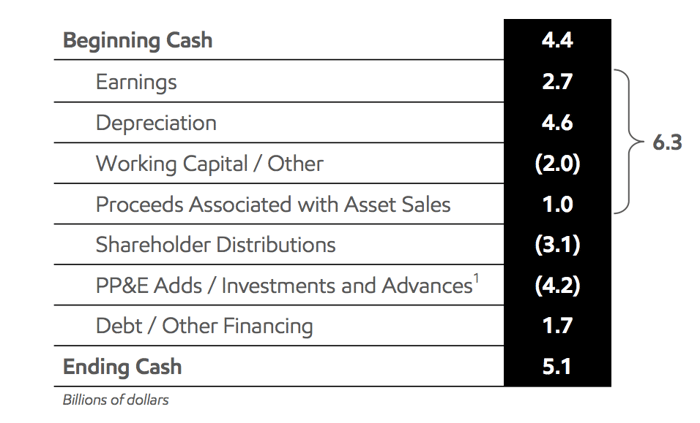 Unfortunately for Exxon and its investors, the story isn't much better on the cash flow statement. Looking at the third quarter, cash flow from operations was $6.3 billion, and the dividend was roughly $3.1 billion, up nearly 3% on a per-share basis, year over year. If that's all the company had to pay for, it would be home free -- but it isn't.

Drilling for oil is a capital-intensive business. Exxon spent $4.2 billion on capital expenditures in the quarter. The math is pretty simple: (4.2 + 3.1) > 6.3. Putting that into English, Exxon's cash flow didn't cover its dividend any more than earnings did. And roughly $1 billion of the company's cash flow was associated with asset sales, which are inherently non-recurring in nature. This is bad news for the dividend.

So how does a company keep paying a dividend and invest in its business? It takes on more debt. Long-term debt now accounts for roughly 15% of the company's capital structure. Before oil prices started to fall in mid-2014, that number was around 5% or so. You get the idea. The company is supporting its business with debt right now, hoping that it can muddle through the downturn.

That said, the company isn't sitting around doing nothing. It cut capital spending 45% year over year in the third quarter, pulling the year-to-date figure down to around a 40% cut. That follows along with the trend that's been going on since oil prices went into free-fall. The goal, of course, is to trim spending enough so that Exxon can pay its dividend and invest in the company's future. It isn't there yet. 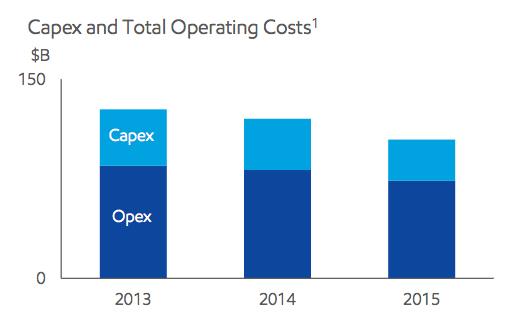 It could get ugly

The unfortunate news is that Exxon's balance sheet and earnings statement could look a lot worse before they start to look better. That's because the company warned that it may have to write down some of its oil assets because of low prices, reducing its oil reserves by around 20%. That's something that other companies have done, but that Exxon has not in any material way. Twenty percent is a big number that will probably pull earnings for the quarter and year into the red.

However, and here's the key thing, a writedown will have no impact on the oil company's cash flow. So the key for Exxon's dividend is that it can either cut costs to the point where it can invest in the business and pay investors, or oil prices pick up enough that it doesn't have to worry as much about rightsizing the business. That said, it's too soon to tell if the dividend will survive, but the cash flow statement will be the place to watch -- with a wary eye on the company's debt levels.

That means income investors are relying on the company's stated intentions and long history of supporting the dividend when deciding if they should invest in Exxon. And on that score, Jeff Woodbury, the company's vice president of investor relations, was very clear during the third-quarter conference call: "[W]e remain resolute in our commitment to pay a reliable and growing dividend." In a middle ground move, it could start paying a scrip dividend, which is what Royal Dutch Shell is doing, issuing shares instead of cash.

Although I wouldn't bet the house on Exxon's dividend, the company's 34-year history of annual dividend hikes, coupled with Woodbury's strong words, suggest the dividend survives. Supporting that is the fact that Exxon still has some room breathing room on the balance sheet and potential options on how it pays the dividend. Don't stop watching the cash flow statement, but for now the dividend looks secure.