Ford Motor Co.'s (NYSE: F) 2016 "Let's Chat" was a chance for Executive Vice President and CFO Bob Shanks to smooth over some of the key business topics facing investors, as well as explain some of the more misunderstood aspects of the company. He covered the usual industry sales outlook, and noted he was pleasantly surprised about Donald Trump's change of tone following his election victory, and his subsequent chat with President Obama. Also, if you'd like more clarity on how Ford reports its China results, due to its joint ventures making it a little more complicated, you should certainly glance it over.

I've long touted Ford Credit as a huge competitive advantage for the automaker, as it's roughly double the size of General Motors Financial (GMF) and generates more pre-tax income for Ford than any business region outside of North America; it's expected to account for $1.8 billion of Ford's 2016 total $10.2 billion pre-tax result. Unfortunately, it appears that lower used vehicle values at auctions are now spreading into nearly all vehicle segments. 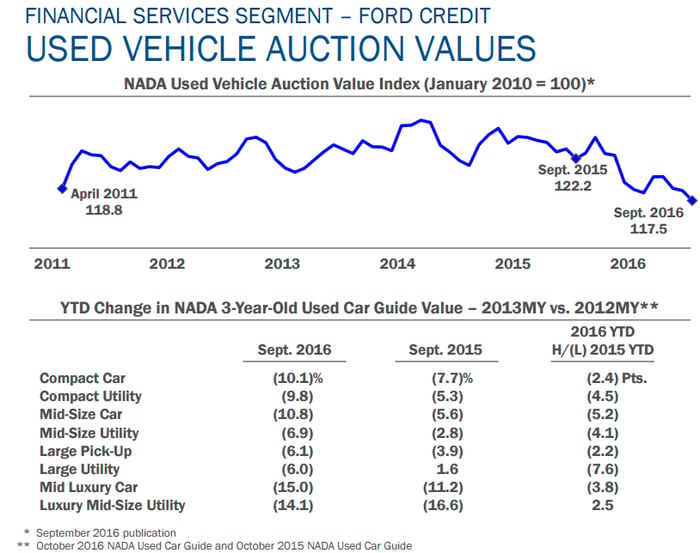 These declining values are causing Ford Credit to reduce its guidance for 2017. This year, it should manage to reach its $1.8 billion pre-tax guidance. Next year, however, Ford Credit is lowering its guidance by $300 million down to $1.5 billion.

For context on Ford Credit, it's worth recalling that back in 2008, during the depths of the financial crisis, it posted an operating income loss of $2.5 billion. What investors might be surprised to know, however, is that the majority of those losses were due to a $2.1 billion impairment charge on its operating lease portfolio due to slumping used vehicle auction values – sound familiar?

In short, Ford Credit is a great profit generator and a competitive advantage ... until the one year it isn't, such as during the first year of a recession. I'm sure Ford has learned from the recent past to some degree, but there's no way for it to totally de-risk this scenario when so many vehicles are leased and auction values drop. That's definitely something investors need to keep in mind going forward.

Global pensions take a hit, too

Let's start with an easy rule of thumb, without getting into the nitty gritty details: When discount rates move lower, pension liabilities move higher. That leads to annual volatility in pension plans' funding status. Many investors overlook the degrees to which pensions are underfunded, but as recently as 2012, Ford's plan was underfunded by nearly $19 billion -- a higher obligation than its automotive debt!

Since then, though, Ford has taken huge steps to de-risk its strategy by pouring billions into its pension fund, but it's value is going to take a hit due to discount rates declining this year. How much, you ask? Ford estimates that its total pension OPEB remeasurement loss will check in at roughly $3 billion. That will move its global status down about 100 basis points to 95% funded.

What I want to point out, though, is that only about $100 million of that $3 billion decline will happen within Ford's U.S. pension plan because it has taken such huge steps to de-risk it -- for this exact reason. Meanwhile, its non-U.S. pension plan, which is driven by U.K. and Germany, will be responsible for about $1.6 billion of the remeasurement loss.

Ultimately, an underfunded pension could have been a way bigger deal than it was, and Ford's overall funded status remaining around 95% is still excellent in the grand scheme of things. These takeaways aren't something that should change your investment thesis on Ford, but they're something to keep in mind when comparing Ford with other automakers and worth keeping track of year-to-year..