Biogen (NASDAQ:BIIB) and Gilead Sciences (NASDAQ:GILD) have both entered the phase of their life cycle where it becomes popular to essentially buy revenue by cutting deals for so-called bolt-on acquisitions. Oddly enough, though, these top biotechs have largely shied away from this growth by acquisition strategy, choosing instead to augment their clinical portfolios through smaller licensing deals or small to mid-sized acquisitions.

Their decision to stay true to a clinically oriented growth engine is surprising for two reasons:

1) The last couple of years have seen record numbers of mergers and acquisitions in the pharma industry -- fueled by low interest rates, high levels of innovation among smaller biopharmas, and of course, the need to boost revenue growth.

2) Biogen and Gilead are both experiencing a heavy drop off in their respective top lines because of maturing markets for their lead drug franchises and increasing competition.

Are Biogen and Gilead in denial?

Perhaps as a result of their hesitation to engage in the ongoing M&A bonanza within the pharma space, Biogen and Gilead have gone from high-powered growth stocks to laggards within the industry.

Turning to specifics, these two biotech heavyweights are on track to fall well behind most of their peers in terms of revenue growth next year: 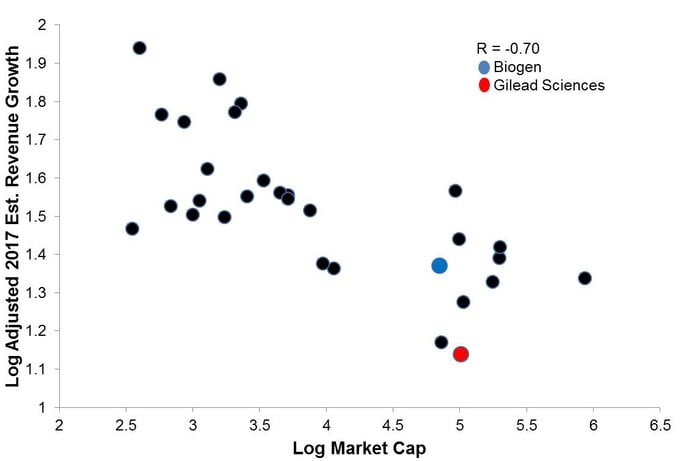 In a nutshell, Biogen's top line is anemic relative to both the entire field of revenue generating biopharmas, as well as within its immediate peer group in terms of market cap. Gilead, on the other hand, is forecast to become, quite literally, the worst performing company of this group next year -- even after accounting for the fact that top line growth traditionally slows with increasing market cap (top line growth and market cap are negatively correlated).

The struggles of Biogen's flagship multiple sclerosis product line and Gilead's hepatitis C franchise aren't exactly news. Wall Street, after all, has been calling for both companies to break with the past to pursue a revenue-generating peer soon.

Unfortunately, the management teams of both companies appear to be in denial regarding their near-term growth prospects.

During its third-quarter conference call, for instance, Biogen's management didn't lay out any specific plans to broaden its product portfolio via a large acquisition -- beyond saying that the company remains interested in doing deals while its ongoing search for CEO George Scangos' successor progresses.

On a similar note, Gilead's brass downplayed the need for a quick fix via an acquisition during its Q3 conference call as well, citing the need to remain disciplined in its approach to mergers and acquisitions in general.

Is patience the correct course of action?

Biogen's and Gilead's respective decisions to kick the can down the road on a bolt-on acquisition may be financially prudent in light of the sky-high premiums being sought by takeover targets these days. But the stark reality is that these top biotechs haven't exactly been tearing it up on the clinical side of the equation either.

Biogen, for example, recently ditched its licensing deal for its next-generation MS medication MT-1303, which was expected to act as a firewall against the host of experimental therapies now in development. And Gilead is reeling from a number of clinical failures, such as GS-5745 for ulcerative colitis and simtuzumab for multiple indications.

To be fair, Biogen and Gilead have had some important wins on the clinical and regulatory fronts in the past year. But the fact of the matter is that neither company has done enough to change its near-term growth prospects in a big way.

Who Biogen chooses as its next CEO is ultimately going to determine the company's M&A plans moving forward. So investors probably shouldn't expect much in the way of progress on a big deal until this change in leadership takes place.

Gilead, though, appears content to let its clinical pipeline do the heavy lifting, so to speak. That could be a wise decision if all goes as planned. The biotech, after all, does have some intriguing clinical assets in the nonalcoholic steatohepatitis space, which have megablockbuster potential.

Yet this is perhaps the riskiest approach of all. Gilead's clinical pipeline has mainly been churning out failures of late, not viable products. Moreover, the biotech sports a massive war chest for potential deals, exiting Q3 with $31.6 billion in cash, cash equivalents, and marketable securities. The company's attempt at waiting until biotech valuations move even lower is certainly mystifying and could prove to be a major misstep if the industry rebounds next year.

All in all, Biogen's and Gilead's hesitation to engage in the pharma M&A party is particularly disheartening when viewed in the context of their comparatively weak growth prospects in 2017 and beyond. That's why investors may want to stick with other names in this space for the time being.