Over the past year, Biogen's (NASDAQ:BIIB) stock has essentially traded sideways due to the increasingly competitive landscape facing its flagship multiple sclerosis treatment franchise, which includes key drugs like Tecfidera and Avonex. The biotech's top line is forecast to rise by a meager 3.4% next year, which is well below the average among large cap biotechs that are expected to produce positive revenue growth in 2017: 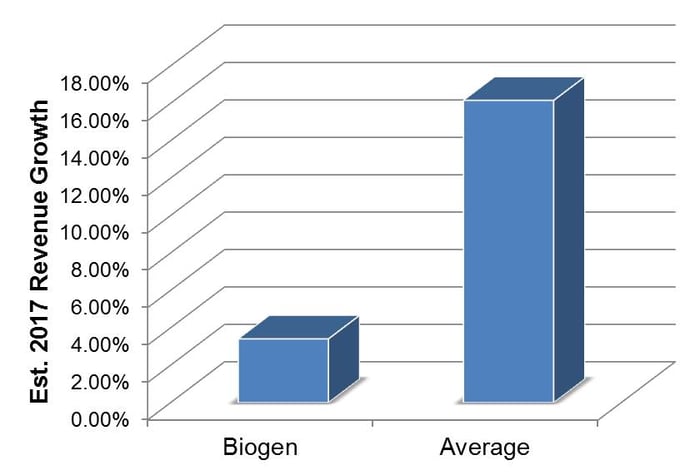 As bad as this graph may look, though, it doesn't tell the entire story surrounding Biogen's anemic top line.

The heart of the matter is that biotech companies tend to go through an inflationary phase in terms of revenue growth over the course of their life cycle. Smaller companies usually post demonstrably higher growth figures than their larger peers. Or, to put it more succinctly: Growth tends to slow at an increasingly rapid pace as a biotech's market cap rises.

While the cause of this underlying relationship isn't altogether clear, the fact remains that size is important when it comes to revenue growth rates. The chart below illustrates this point nicely: 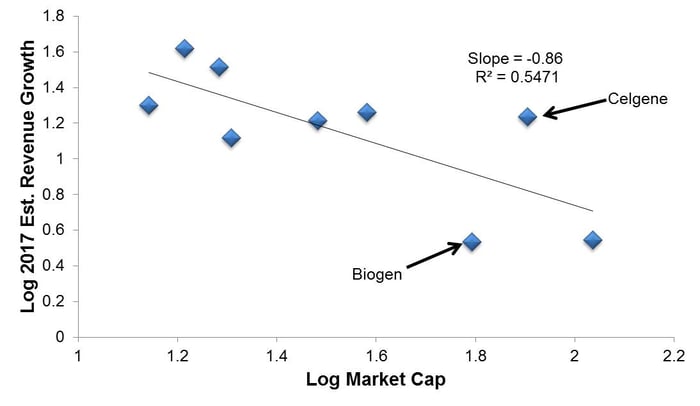 Without straying too far into the statistical woods, the chart simply shows that large companies (those farther to the right) tend to produce comparatively lower amounts of revenue for their size -- with the notable exception of cancer specialist Celgene (NASDAQ:CELG). (We'll circle back to that particular oddity later on.)

What this pattern means is that we need to account for market cap (size) in order to make meaningful comparisons on the growth front. And that's where Biogen's weakness really becomes apparent.

After factoring Biogen's market cap into the equation by calculating the difference (residual value) between market cap and 2017 estimated revenue growth on the above linear regression -- it becomes all too clear that this particular biotech is a huge laggard within its peer group. 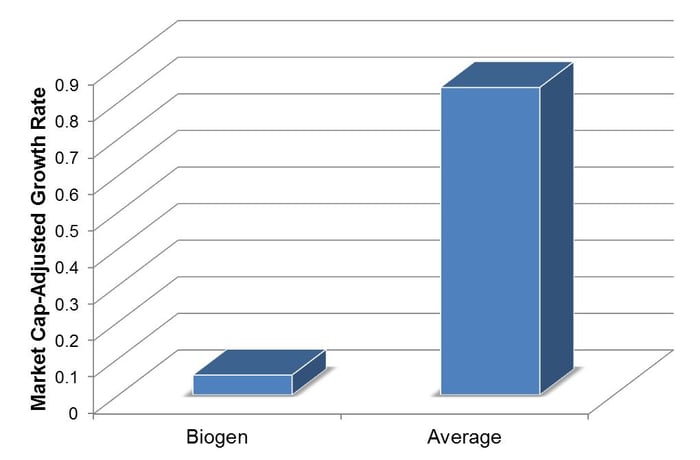 To drive this point home, Celgene, a company with a markedly higher market cap than Biogen, actually sports a vastly more impressive market cap-adjusted growth rate (i.e. revenue growth outside of what could be expected given a company's market cap): 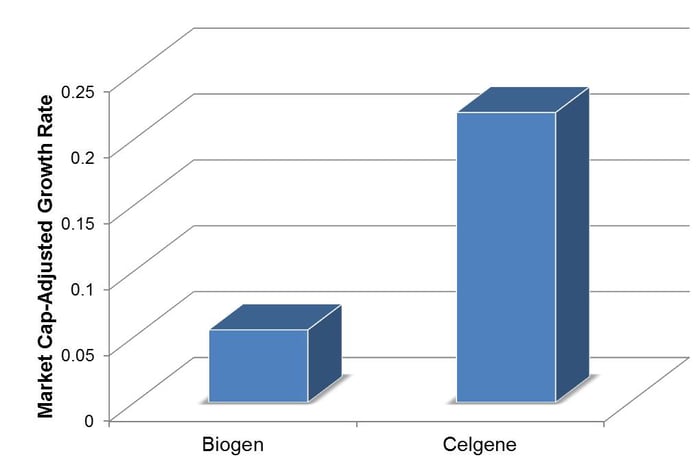 I think the answer to this all-important question is "yes." Turning to the specifics, Biogen and its partner Ionis Pharmaceuticals (NASDAQ:IONS) recently announced that the FDA and the European Medicines Agency both agreed to review the regulatory applications for Spinraza (nusinersen) -- a candidate to treat infantile onset spinal muscular atrophy, or SMA -- on an accelerated time line. This means that Biogen could have a new growth product on the market as soon as the second quarter of 2017.

Perhaps more importantly, though, this single drug has the potential to boost Biogen's top line by 1% to 2% next year based on the serious unmet medical need for SMA treatments, as well as the fact that rare disease drugs typically garner premium prices. And, longer term, Spinraza could drive Biogen's annual revenues upward by high single digits -- even after accounting for the milestone and royalty payments owed to Ionis.

Now, the next possible -- and arguably, probable -- short-term catalyst is a bolt-on acquisition designed to bring valuable new growth products into the fold. Unfortunately, Biogen will almost certainly have to go further into debt to buy a revenue-generating company, given its relatively weak cash position of $4.32 billion on hand the end of Q3. Regardless, this company unquestionably needs additional revenue streams sooner rather than later, meaning that management may make an acquisition a top priority.

At the end of the day, Biogen does have some viable options in terms of revving up its growth engine next year. But the company does need to be aggressive in the coming months on either a licensing deal or an outright acquisition to shore up its top line. Until that happens, however, investors may want to stick with biotechs that have more solid growth prospects like Celgene.