With Donald Trump's upset victory in the presidential election, there's been a lot of speculation about how his presidency might affect various stocks and various sectors of the economy. But one overlooked area where Trump's policies might have a substantial impact is in the waste-management industry.

The prospect of increasingly stringent regulations is one of the biggest risks to investing in waste-management companies, so big trash haulers such as Waste Management (NYSE:WM) and Republic Services (NYSE:RSG) as well as specialty players like Clean Harbors (NYSE:CLH) could stand to benefit from Trump's stated commitment to removing regulations. But there might be unintended negative consequences for the industry as well.

The burden of regulation

Waste Management goes further in its annual report, suggesting that the regulatory environment has been getting more strict lately: "In recent years, we have perceived an increase in both the amount of government regulation and the number of enforcement actions being brought by regulatory entities against operations in the waste services industry. We expect this heightened governmental focus on regulation and enforcement to continue."

Among the federal regulations that affect the companies are the Clean Air Act of 1963, the Solid Waste Disposal Act of 1965, and the Clean Water Act of 1972. Because all three were passed by Congress, Trump would be unable to repeal any of them outright, even if he wanted to. However, because the acts rely on the Environmental Protection Agency -- part of the Executive Branch -- for enforcement, Trump could still weaken or revoke some of the regulations that derive their authority from the Acts, without affecting the Acts themselves.

Should I stay or should I go?

Trump has devoted an entire section of his website to proposals and plans for regulation (or, mostly, deregulation). These include issuing "a temporary moratorium on new agency regulations" and asking all federal department heads "to submit a list of every wasteful and unnecessary regulation which kills jobs, and which does not improve public safety, and eliminate them." In fact, he even proposes to "reform the entire regulatory code." While this sounds sweeping in scope, Trump only lists a handful of specific regulations he's targeting, including the EPA's Clean Power Plan and Waters of the United States rule.

However, other EPA rules could be altered -- or simply left unenforced -- by a Trump EPA. For example, because landfills are a major source of greenhouse gases, changes in emissions regulations or enforcement would likely have a profound effect on the fortunes of landfill operators, particularly Waste Management, which owns more North American landfills than any other company. Changes to fuel economy standards, too, would have an impact on waste haulers, which maintain large fleets of trucks.

While you'd need a detailed list of proposed regulation cuts to truly assess the impact on any given company, it seems as though waste management companies stand to benefit in this regard from a Trump administration.

However, some types of regulations actually benefit waste-management companies. Republic Services, for example, owns or operates eight treatment, recovery and disposal facilities and 12 salt water disposal wells that service the energy industry. These operations handle the waste that's generated by oil and natural gas exploration and production, and by coal-fired power plants. Clean Harbors provides many waste-management services to the oil and gas industries, including waste removal and environmental cleanup.

But if Trump loosens environmental restrictions on the energy industry, as he has proposed, oil and gas companies may be able to cut waste disposal and treatment costs, which would hurt the sector. On the other hand, increased natural gas production -- one of Trump's goals in relaxing regulations -- would probably mitigate some of that issue by providing more need for disposal and treatment services.

Existing waste management companies also benefit from regulatory barriers to entry in the industry. For example, the July 2016 update to the EPA's New Source Performance Standards lowered the regulatory threshold for requiring landfills to install and operate an expensive gas collection control system. Large, established landfill operators benefit from this rule change, which prevents potential smaller competitors from expanding without having to make a significant outlay of cash. If a Trump EPA relaxed, eliminated, or failed to enforce this and other regulations, smaller competitors -- or new ones -- could cut into existing companies' margins in this already-competitive industry.

However, regardless of federal policy, there will still be significant barriers to entering the industry. A 2013 Department of Justice report notes that "entry into municipal solid waste disposal markets can be costly, time-consuming and, in some heavily populated areas, virtually impossible, because of permitting restrictions for waste disposal." Even a single transfer station "can face significant obstacles from local zoning and environmental regulators and local residents concerned about noise, traffic, and odors."  That's good news for existing industry heavyweights.

The market certainly seems to think waste management companies will do well under President Trump, sending waste-management stocks higher after his election: 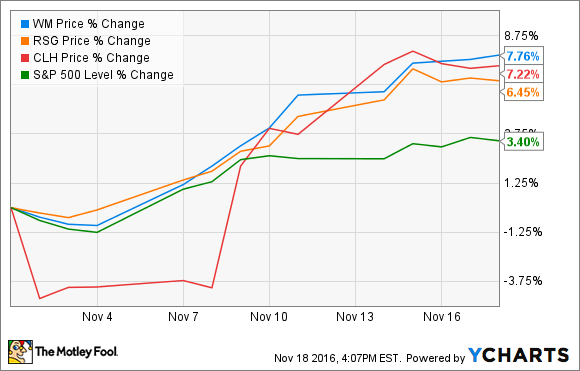 It's probable that Trump's policies will help, rather than hurt, these stocks. Loosened regulations coupled with increased energy exploration and production spell opportunity in this sector. The potential downsides -- specifically, relaxed waste disposal standards and the lowering of barriers to competition -- could dampen some of the opportunity, but on the whole, these stocks are poised to have a good four or eight years.