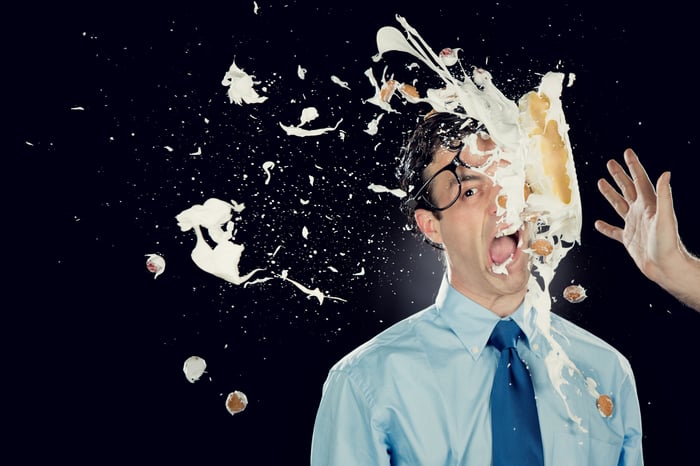 Just as people are often their own worst enemies, the business and investing worlds often do themselves no favors. In particular, while some mergers can provide a huge benefit, corporate boards and C-suites have also made plenty of bonehead buyouts over the years.

Be it the result of faulty analysis, plain old bad luck, or a combination, the media industry has accounted for its fair share of dubious deals over the years. Here's a quick review of some of the biggest M&A flops in media history.

Nobody could have guessed it at the time, with Facebook having been founded just the year prior, but News Corp.'s (NASDAQ:NWS) (NASDAQ:NWSA) $580 million acquisition of MySpace in 2005 was akin to catching a falling knife. Then just two years old in its own right, MySpace saw things unravel quickly under its new ownership. The two companies clashed culturally, and News Corp. reportedly micromanaged the once-nimble start-up to disastrous results.

It's impossible to know to what degree each company was responsible for MySpace's fall from grace. Driven by its talented founding team, Facebook innovated faster than MySpace, and News Corp. threw in the towel on its high-profile mistake, selling MySpace for just $35 million in 2011 to a group of private investors including singer Justin Timberlake.

The U.K.-based social-networking site sported 22 million unique visitors each month and 11 billion monthly page views at the time of AOL's buyout. Layering AOL's advertising operations over Bebo's social-media presence seemed liked a moneymaking proposition at the time. However, Bebo was never able to gain much in the way of traction outside the U.K., leading AOL to ultimately sell the service a mere two years later for just $10 million.

And now we reach the main event. The AOL-Time Warner (NYSE:TWX) merger in 2000 could be the worst of all time, and certainly the least successful.

Amid the dot-com bubble at the dawn of the new millennium, AOL's purchase of one of the largest and most established media giants in America spoke to the belief that "new media" was going to rewrite all the rules. At the time of the deal, the jointly named AOL Time Warner boasted a $350 billion market capitalization. Then a number of things went wrong. The dot-com bubble burst, dampening investors' appetites for highly valued tech deals. AOL's business model of paid dial-up subscribers, meanwhile, was eroded by the advent of faster broadband Internet connections. And melding the cultures of the two prominent organizations proved far more challenging and problematic than anyone had ever assumed.

The fallout brought executive firings and resignations, several rounds of layoffs, and an awful writedown of the combined entity's value. Just three years later, AOL Time Warner booked a $99 billion loss on the deal. AOL was subsequently spun out from the combined entity and acquired by Verizon Communications for $4.4 billion. Time Warner is now worth $73 billion and is in the midst of being purchased by AT&T, prompting questions about whether will history will repeat itself.

Ultimately, that's the point of this article: to shine a light on the not-so-successful merger ideas in the media space. As such, any investor in the media space should examine both the wins and losses of a particular company's acquisition history before deciding to invest.