Different phases of life are often best served by specially tailored investing strategies, and weighting your portfolio toward a lower-risk, income-generating mode tends to be a prudent move once you're in the retirement-age range.

Here's why AT&T (NYSE:T), Disney (NYSE:DIS), and Johnson & Johnson (NYSE:JNJ) are top stocks for investors in their 60s. 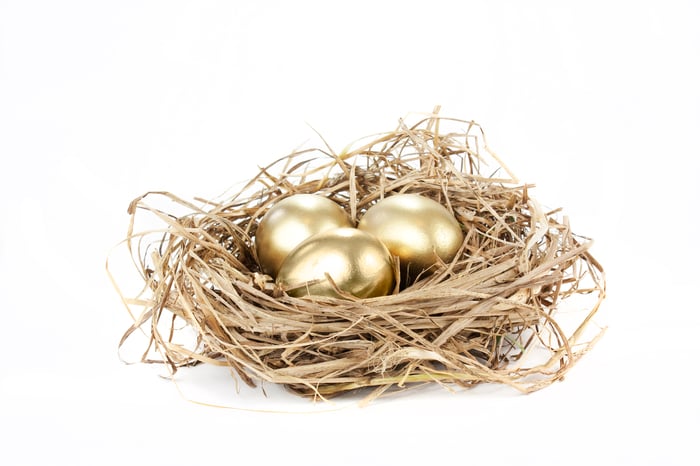 AT&T packs a dividend profile that few stocks measure up to. It already boasts a 5.4% yield, and the company has raised its payout on an annual basis for 34 years running -- a streak that indicates steadfast commitment to payout growth as a component of stock ownership.

With the cost of distributing its current payout representing roughly 58% of trailing earnings and 70% of trailing free cash flow, the communications giant still has plenty of leeway to continue boosting its payout. Recent changes in the corporate tax code have significantly brightened AT&T's earnings outlook, and the company appears to be on track to leverage its moat and take advantage of some big opportunities on the horizon.

While budget-priced competition from Sprint and T-Mobile has put pressure on the company's wireless business, the outlook for premium service in the category probably isn't as dire as the stock's lack of capital appreciation over the last five years might imply. AT&T is on track to be one of the big leaders in 5G network technology -- an advantage that could extend far beyond mobile as automotives, household appliances, and other devices are increasingly connected to the net.

The pending acquisition of Time Warner also has the potential to create a long-term competitive advantage. AT&T's position in mobile could allow it to deliver targeted advertisements through Warner networks that fetch much higher rates than ads delivered through cable. Buying one of the world's leading media companies also stands to be a major asset when it comes to bundling mobile wireless and video services.

Disney's nonprohibitive valuation, underappreciated growth prospects, and dividend make it an ideal choice for investors seeking well-rounded stocks. Shares yield roughly 1.6% at current prices -- not far below the S&P 500 average yield of 1.8%. Disney's yield isn't huge right now, but its stock looks cheap, and the company will likely continue to increase its payout down the line.

The House of Mouse been aggressive with dividend growth, nearly doubling its payout over the last five years. With the cost of distributing its current payout coming in at just 24% of trailing earnings, there's still plenty of room to boost its disbursement.

Disney's share price has been kept flat through the last two years, missing out on the broader market momentum amid mounting threats to its largest revenue stream. The company's media networks segment is under pressure from cord-cutting trends and ratings declines at ESPN, and the market doesn't seem to be sold on direct-to-consumer streaming services as a solution. These risk factors deserve consideration, and could be disqualifying factors if risk minimization is your primary investment goal, but I think Disney's strengths set it up to thrive in streaming and maintain its forefront position in entertainment.

With access to the Marvel universe, Star Wars, the Pixar catalog, and a huge selection of other successful Disney properties, the company already has a strong lineup of film and television content. These franchises give it an edge over Netflix and Amazon when it comes to creating original content for streaming services as well. Disney also has a stable of entertainment franchises that's the envy of the industry, and its pending acquisition of Twenty-First Century Fox's film assets stands to add even more weight to that advantage.

Trading at less than 15 times this year's expected earnings, Disney stock is an appealing value play that has strong dividend growth and capital appreciation prospects.

Johnson & Johnson's position across diversified healthcare industry segments and stellar dividend history make it a compelling asset for an income-focused portfolio. Long-term investors have an opportunity to establish or add to an existing position at an appealing price following a recent haircut for the stock.

J&J's pharmaceutical business accounts for roughly half of its revenue, and concerns about the future of the segment have prompted shares to shed roughly 8% of their value year to date. Sales for its top-selling drug Remicade have been trending down and will likely continue on that trajectory due to expired patents and increased competition, but the company is seeing promising growth for other drugs and is  supplementing its business with new acquisitions and investing to deliver innovation internally.

Turning attention to J&J's other businesses, the medical devices segment has the potential to become a bigger growth driver with surgical robots on the horizon, and it's looking to reverse slowdown in its consumer products segment by utilizing e-commerce channels and new product initiatives. An aging population in the domestic market and growing demand in international territories should also play in the company's favor.

The healthcare giant is still posting solid growth for a relatively mature company, with sales up 6.3% and adjusted earnings up 8.5% year over year in its December-ended fiscal year. Much of that growth is due to acquisitions, but its recent purchases are the types of moves the company should be making and look to be adding significant long-term value to the business.

Shares are attractively priced at roughly 16 times forward earnings. J&J's 2.6% dividend yield is comfortably above that S&P 500's average yield, and a 55-year history of annual payout increases and 41% payout ratio suggest that shareholders can be confident that the stock's dividend will continue to grow. The company probably won't post rapid earnings growth, but the stock stands out as a relatively safe investment that can be counted on for its solid dividend and regular payout growth.