Many new investors might be afraid to buy stocks today, since the S&P 500 is hovering near historic highs. However, several stocks of well-known "big brand" companies remain cheap relative to their industry averages and the S&P 500's current P/E of 24. Let's take a closer look at three such stocks -- Disney (NYSE:DIS), Apple (NASDAQ:AAPL), and Harley-Davidson (NYSE:HOG).

Disney currently trades at 17 times earnings, which is lower than the industry average of 19 for diversified entertainment companies. However, Disney stock also declined 14% over the past 12 months, woefully underperforming the S&P 500's 6% gain.

Although the House of Mouse's movie and theme park businesses are strong, ongoing concerns about cord cutters gutting its media business have weighed down the stock. Even ESPN, once considered immune to the effects of cord cutting due to the lack of live sports on streaming platforms, shed millions of subscribers over the past few years.

However, Disney recently revealed that ESPN's total subscriber count only fell 2.2% to 90 million in 2016. That's the third straight annual decline for the network, but it also represents a more moderate drop than the network's 3.2% decline in 2015 and 4% drop in 2014. Disney continues to expand ESPN beyond cable TV with its website, mobile app, and new stand-alone streaming platform -- which could offset its loss of cable subscribers. It's an uphill battle, but analysts are optimistic and expect Disney's revenue and earnings to both improve 4% this year.

Apple trades at 13 times earnings, which is lower than the average P/E of 17 for electronic equipment companies. However, Apple also underperformed the market over the past year with a 5% decline. The main weight on Apple has been its dependence on the iPhone, which generated 60% of its sales last quarter. iPhone shipments slipped annually for the first time during the second quarter of 2016, and continued declining over the following two quarters.

Shipments of iPads and Macs also declined and failed to offset the iPhone's weakness. That's why Apple's revenue fell annually for the first time since 2001 last quarter. There's also lots of uncertainty regarding Apple's future under the Trump Administration -- higher tariffs on foreign-made goods could hurt Apple, but lower corporate tax rates could let it repatriate its cash back to the country for acquisitions, buybacks, and dividends. 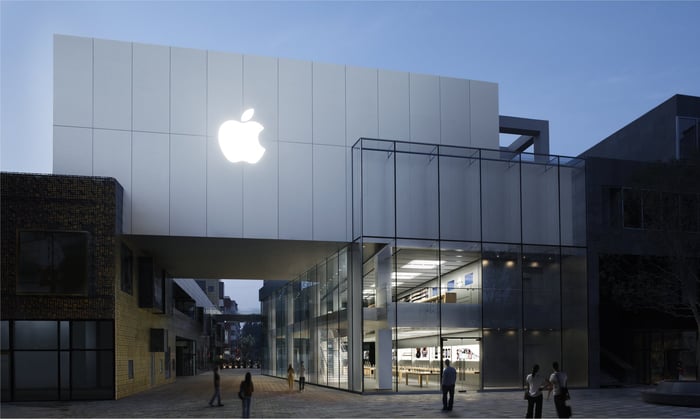 Looking ahead, Apple hopes that revenue from its software services -- like Apple Music, Apple Pay, AppleCare, and iTunes -- will gradually diversify its top line away from hardware. Revenue from those businesses rose 24% annually and accounted for 13% of Apple's top line last quarter. Apple could also still dip into its massive cash hoard to acquire other companies or develop new hardware products. Analysts believe that Apple's revenue and earnings will respectively rise 7% and 9% this year.

Harley-Davidson trades at 16 times earnings, compared to an industry average of 19 for recreational vehicle makers. But unlike Disney and Apple, Harley-Davidson outperformed the market with a 23% gain over the past 12 months.

On the surface, Harley's growth looks dismal -- revenue fell 4% annually last quarter, compared to 1% growth in the prior year quarter. Earnings per share dropped 7%, its worldwide market share declined, and its U.S. market share stayed flat. To offset that slower growth, Harley plans to "streamline its operations" during the current quarter by laying off employees and restructuring the company -- which will cause it to incur $20-$25 million in expenses.

However, analysts expect those cost-cutting measures to boost its cash flows and give it more freedom to buy back shares or raise its dividend. Harley currently pays a forward yield of 2.3%, and has hiked its payout for five consecutive years. Harley's new Milwaukee-Eight engine -- which adds "improved horsepower, torque, comfort, and enhanced sound" -- also boosted September sales of its Touring motorcycles over the prior year, and might support its sales growth through the end of the year. Analysts expect Harley's revenue to stay nearly flat this year, but for its earnings to rise 5% on improved cost controls.

But should you buy these three stocks?

Disney, Apple, and Harley Davidson are all "cheap" big brand stocks, but investors should carefully weigh their strengths and weaknesses first. Disney's ESPN woes seem to be fading, but the media business still generated over half its operating income last quarter.

Apple has plenty of growth opportunities, but it's unclear if CEO Tim Cook will pull the trigger on riskier and more disruptive ideas. Harley is a decent slow-growth play, but it's uncertain if the stock's year-long rally is really justified by its underlying growth. Therefore, "big brand" stocks are a good place to start, but investors should do their due diligence before buying any shares.