The big problems facing Harley-Davidson (NYSE:HOG) are fairly well known. It hasn't been able to sell as many of its motorcycles these days, because economic uncertainty makes buying one of its pricey bikes less necessary, just as changing industry demographics have those buyers who are still in the market looking for more sportier models and less for touring and cruiser models. Add those factors together and Harley is staring at eight straight quarters of lower sales.

Yet the biggest U.S. motorcycle manufacturer also faces a less obvious risk, one that is more hidden to the casual investor: In addition to selling motorcycles, parts, and accessories, Harley also finances its products' purchase with loans. Management's acceptance of rising risk factors in its portfolio increases the potential for greater problems down the road.

Harley-Davidson Financial Services is essentially a one-stop shop for motorcycle buyers that, by financing any motorcycle aftermarket parts, clothes, and accessories a buyer wants at the time of a bike purchase, makes it an easier decision to buy the bike in the first place. It's a huge convenience that can work in Harley's favor when times are good.

But times aren't so good now, and Harley-Davidson continues to take on risky buyers in an attempt to juice sales. The situation may not have reached the critical stage yet, but it also might not take much to kick it up to that level, either.

Harley-Davidson's loan portfolio is deteriorating. It is and always has been a big lender to buyers who, because they can't afford one of its bikes, really shouldn't be buying one. The subprime market of high-risk borrowers accounts for about 20% of its loan portfolio, but the number of borrowers who are falling delinquent on their loans is on the rise.

At the end of the third quarter, loans at least 30 days past due had risen to 3.61%, about the same level as in 2011, but higher than the 3% delinquency rate in the third quarter of 2014. The value of the loans that were 90 days delinquent jumped 31% from the year-ago period, hitting $31.3 million, while the total value of loans that are at least 30 days delinquent was $194.1 million, 14% higher than last year. 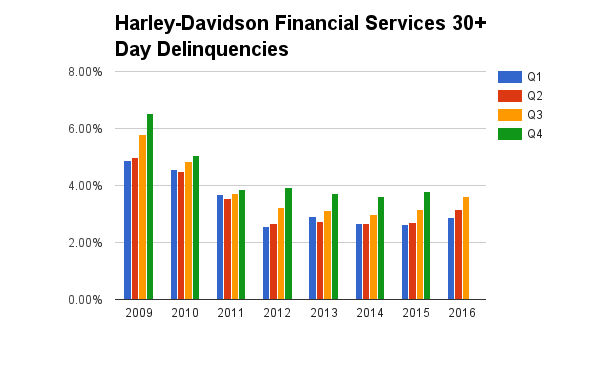 That's significant, because when a loan goes delinquent for 120 days, Harley writes off the loan. (It also charges off the loan if it repossesses the bike or otherwise determines the loan is uncollectible.)

At the same time, Harley's annualized loss experience for the division is also rising, hitting 1.59% in the period just ending, about on par with its condition in 2010. It had to raise its provision for credit losses from its financial services business some 34% from last year to $36.5 million. A much smaller portion of that is due to loans extended to its dealerships, which, although only amounting to $400,000 in the the third quarter, is quadruple the amount of a year ago. It seems its dealers are increasingly falling on hard times, too.

However, as noted, this isn't critical yet for Harley-Davidson. As it pointed out during its earnings conference call with analysts, Harley-Davidson Financial Services had $351.4 million of cash and cash equivalents in the bank and available liquidity through other credit facilities of almost $984 million, so it does have the financial resources available to it to cover its losses.

The problem is that it shows a worsening condition that looks like it will only deteriorate further, and as sales fall, it is going to be relying upon the riskiest of borrowers to make its sales numbers. And let's not forget, Harley carries a heckuva lot of debt on its balance sheet, partially from financing those loans -- almost $5.2 billion.

Harley-Davidson admits it is a major lender in the subprime market but has no intention of cutting back on the practice. In fact, for the past seven years, it says HDFS has been making substantial profits from these borrowers because it prices its loans for the risks it's underwriting. It believes the rising delinquencies are merely a reversion to the mean and nothing to be concerned about. CFO John Olin told analysts, "It remains incredibly profitable and it's doing what we expected."

Still, investors who may like to focus more on the motorcycles Harley-Davidson sells may now also want to factor in just how these buyers are paying for them, whether they can continue to finance their loans, and what risks that represents to the business. The situation may not be as bad as it was back in 2009 during the depths of the recession, but it's clear the motorcycle leader is facing more difficult times ahead.