Please ensure Javascript is enabled for purposes of website accessibility
Log In Help Join The Motley Fool
Free Article Join Over 1 Million Premium Members And Get More In-Depth Stock Guidance and Research
By Rich Duprey - Oct 27, 2016 at 8:46AM

The big bike maker's stock surged after earnings, but there's little reason for it to be moving higher.

Instead of punishing Harley-Davidson (HOG -9.29%) stock like it should have for yet another quarter of disappointing results, the market has instead bid up its shares 14% as investors ignored falling sales, weakening profits, and continued losses of industry share in favor of cost-cutting and a new engine helping to rev up a turnaround.

Harley-Davidson still owns more than half the big bike market, but U.S. sales have fallen for two straight years, suggesting its stock price shouldn't be opening its throttle. Image source: Flickr via Nacho.

The big bike maker reported retail motorcycle sales in the third quarter of just under 69,000 bikes, a 4.5% decline from last year and an indication that the industry's condition is worsening. Harley, though, is leading the way down as it's also the eighth straight quarter -- two consecutive years worth -- that it hasn't been able to post a single quarter of higher sales year over year, and there's no indication that trend is about to make a U-turn anytime soon.

Buying Harley-Davidson's stock now will only set up your portfolio for a serious case of road rash later on.

Polaris is looking to expand outside of those markets, announcing an acquisition that would introduce it to the retail market through accessories for Jeeps and off-road trucks. Yet sales for Jeeps tumbled this month, and Ford's top-selling F-series trucks have suffered declining monthly sales all year long.

That doesn't bode well for Harley-Davidson, which steadfastly insists it will still be shipping between 264,000 and 269,000 motorcycles this year. Despite sales declines in the U.S. that are accelerating -- a particularly worrisome trend since it's the bike manufacturer's biggest market, accounting for almost two-thirds of total sales -- it says it will still ship as many bikes this year as it sold in all of last year. 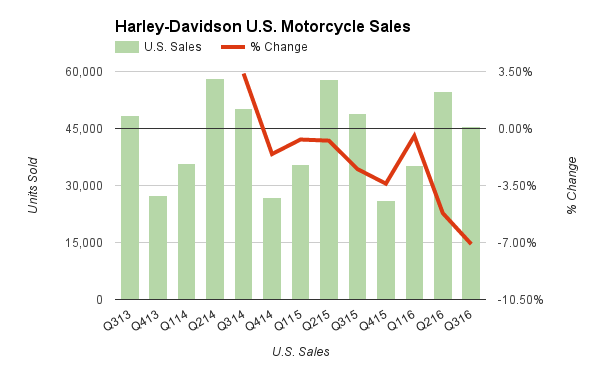 The shipment guidance may be lower than what it started the year off believing it would ship, but it's still too high based on Harley's sales trends. There's no good reason for the company to ship so many.

Filling the dealerships with inventory

That, of course, hasn't stopped Harley-Davidson in the past. In the fourth quarter of each of the past two years, the motorcycle maker has shipped just enough bikes to dealers to make it over the low end of its guidance, even though sales didn't justify it. That it may do so again this year would not be a surprise, but it also doesn't mean investors should be bidding up the stock. 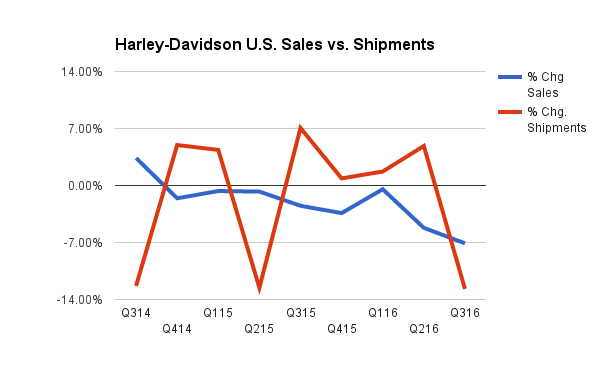 Not even Harley's cost-cutting measures make it worth it. Last month, it announced it was laying off about 200 workers, with more than half of them coming from its York, Penn., facility that was refurbished a couple of years ago. That plant is also where Harley assembles its touring, Softail, CVO, and Trike models, suggesting its business in those lines isn't doing well.

It might have better luck with its new Milwaukee-Eight engine that debuted on all three new 2017 motorcycles, in addition to a redesigned upgraded suspension. According to the bike maker, the new product introductions helped rev up U.S. sales in September.

Touring bike sales jumped 6% from last year to 23,295 bikes. While touring is Harley's biggest segment, or 48% of total sales, it still wasn't enough to offset the dramatic drop in cruisers and Sportsters and Streets, where sales plunged 24% and 13%, respectively. The Sportster-Street segment should be of particular concern because Harley was counting on these runabouts to drive sales. Now it appears it's counting once again on the heavy bikes, though that might not be so bad since they also tend to be more profitable.

In all, though, the exuberance the market has shown toward Harley-Davidson's results are unjustified. It might have beat analyst expectations, but that was only because the bar had been set so low. Its industry is weakening, its business is falling faster, and the competition remains pointed. Running up its stock as investors did is unwarranted, and they've just set themselves up to be disappointed later.