Machine vision company Cognex Corporation (NASDAQ:CGNX) and security products manufacturer Allegion (NYSE:ALLE) both have stocks that trade at a premium to the market and to their peer group. As you can see below, both stocks trade above a clutch of companies exposed to industrial automation and/or construction spending. Let's take a look at why. 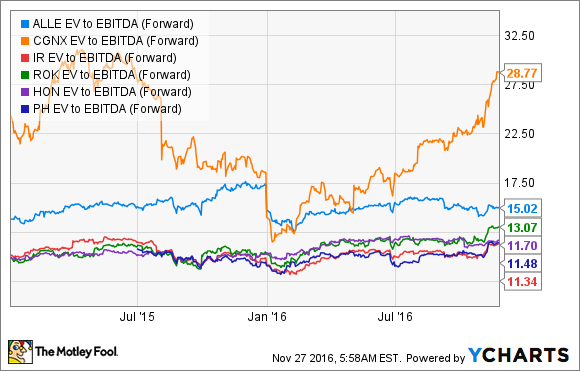 It's been a bumpy few years for the machine vision company. Last year was characterized by disappointing efforts to book anticipated large deals in consumer electronics and logistics, but 2016 has seen revenue growth exceed management's expectations for four quarters in a row.

In short, it's been a return to form for the company. Not only is Cognex firing on all cylinders, but there are reasons to believe it has medium- and long-term growth drivers in place. Here are five key growth drivers to look out for.

All told, analysts already have Cognex growing EPS by 28% and 12% in the next couple of years, respectively, but all it will take is a few of these growth kickers to make good and they might be rushing to revise estimates higher. The stock may not be a screamingly good value right now, but investors are paying a premium for the growth potential.

Security doors and locks may not be the first area that springs to mind as a technology growth story, but in reality it's a large part of the allure of Allegion as an investment. Summarizing the company's long-term growth opportunities:

In a nutshell, Allegion's wireless locks allow users to configure and monitor locks. Access can be granted to or taken away from certain staff, and the information from the locks can immediately enable companies to monitor exactly who is accessing designated areas. In short, there is a clear value-add from the Internet of Things.

It appears to be working, with the company expecting 5% to 6% organic revenue growth in 2016. Overall, analysts are expecting EPS growth of 12.2% this year and 9.4% in 2017. And just as with Cognex, investors are willing to pay a premium for Allegion's long-term growth prospects.

Time to be bullish on Allegion and Cognex Corporation? Image source: Author.

Both Cognex and Allegion are attractive stocks, and investors should be willing to pay premiums for companies with strong long-term growth prospects. That said, Cognex has had a great run this year (up nearly 80%) and the stock's trading history has been volatile. Allegion is more conservatively valued, but doesn't possess as much potential for upside surprise. All told, they are great stocks to monitor and to pick up on any weakness, but for now they look fully valued to me.