Sure, sales of new vehicles in the U.S. are likely peaking, but peaking near record levels is still an enviable scenario for automakers. While there are still some results to be reported, it appears the industry is going to top estimates, all fueled by incentive spending and Black Friday sales. Here's a look at Ford Motor Company's (NYSE:F) and General Motors' (NYSE:GM) highlights -- hint: Detroit's two largest automakers did well -- as well as Fiat Chrysler Automobiles' (NYSE:FCAU) results, which trailed the others'. 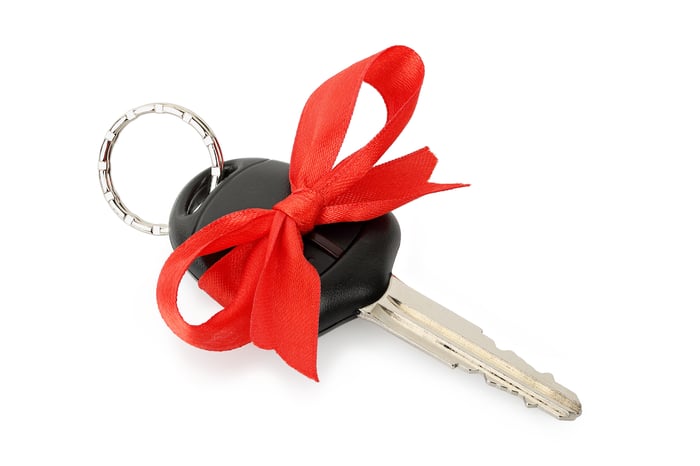 Compared to the prior November, Ford's total sales rose 5.2% to 197,574 units, which was far above estimates (per Bloomberg) of a 0.5% gain. Ford's fleet sales also continued to decline during the back half of 2016, down 9% compared to the prior year. Even better was that Ford's retail sales jumped 10% higher -- which means not only did Ford's total sales rise, they were driven higher by more profitable retail sales.

The F-Series also recorded a robust month, with sales topping 72,000 units. That's the first November in 15 years that the F-Series recorded sales above 70,000. The F-Series' total 11% gain was also driven by the retail channel, with retail sales up 14%. SUV sales also had a strong month: Sales topped 60,000 units for a 20% gain over the prior November. Those factors helped Ford's total average transaction price move $1,000 higher than last year, far above the industry average increase of $320.

Last but not least, Lincoln's Continental posted its best month of sales since its launch. Those incremental sales (as the Continental wasn't yet selling at this time last year) helped push Lincoln's total sales to 9,429 units, a 19% gain over the prior year.

General Motors proves strong across the board

If you total those gains, GM's sales hit 252,644 during November for a 10% gain over the prior year. And, similar to crosstown rival Ford, it posted an 8% gain in retail sales, which helped drive its retail market share to its highest November level since 2009.

GM's average transaction price checked in at $35,767 last month, which is more than $4,000 higher than the industry average (investors can thank full-size trucks for that). There is some evidence that GM's strong sales month was in part due to rising incentives: GM's incentive spending as a percent of average transaction price was 13.7%, above the industry average of 12.4%.

Despite rising incentives, it was still a great month for GM and its investors, and now we can expect the automaker to continue selling down 2016 model year inventory, which will likely mean more retail market share growth in December.

Fiat Chrysler gets left in the dust

On the bright side, Ram Truck brand sales were up 12% in November, but that's roughly where the good news ends for FCA. Its U.S. sales totaled 160,827 units last month, a 14% drop from the prior November. Black Friday sales served up enough consumer demand for FCA's retail sales to record a lesser decline of 2%. Meanwhile, fleet sales fell off a cliff, down 42% compared to the prior November. That drastic change in fleet sales makes FCA's total 14% decline look worse than it really is, but the 2% decline in retail sales still suggests it lost ground to its Detroit rivals -- and among the rest of the industry.

Predictably, Dodge and Chrysler both struggled mightily during November, with sales plunging 21% and 47%, respectively. After years of driving the automaker's U.S. sales higher, Jeep has continued its recent struggle, posting a 12% decline in November. Jeep brand sales are still up 8% year to date, but this is the third consecutive month of declines -- and at a more rapid pace. Now all eyes will be on holiday specials and incentives in December, as the strong November showing actually makes it possible for the industry to top 2015 in total sales. Even if automakers indeed top last year's mark, U.S. new-vehicle sales are still plateauing, albeit at robust levels, and investors will want to keep an eye on incentive spending compared to average transaction prices as a primary indication of industry health.