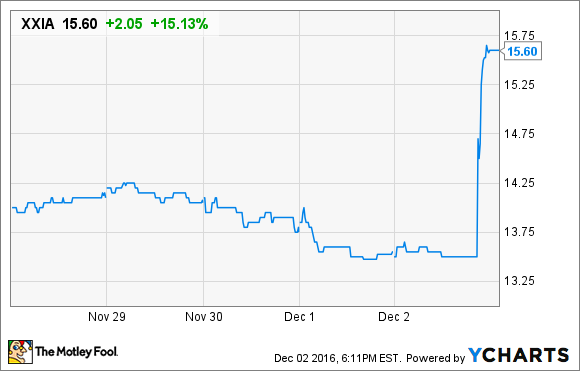 Ixia stock got a big bump on Friday. XXIA Price data by YCharts.

Shares of networks-security-specialist Ixia (NASDAQ:XXIA) stock jumped as much as 17.7% in Friday intraday trading before closing the day up 14.8%. The shares continued to inch up after hours, gaining a further 2.2% in evening trading by 5:45 p.m. EST.

In an exclusive story, Reuters reported Friday that Ixia "is exploring a potential sale" of its business. Reuters did not say who precisely might buy the company, or how much they might pay for the stock, which is worth $1.28 billion after Friday's run-up.

However, Reuters did cite knowledgeable parties who confirm that "a sale process ... is already under way and has attracted the interest of other companies and private equity firms." So this appears to be something more than a rumor -- even if it's something less than a done deal.

Profitable for the past two years, Ixia has grown its revenues nearly 60% over the past five years, according to data from S&P Global Market Intelligence. That said, future growth prospects look grim, with most analysts surveyed by S&P Global positing only a 6.5% growth rate for the stock. The company has $495 million in trailing sales and $9.4 million in reported profits, and the stock already sells for 2.6 times sales and 136 times earnings, which sounds very expensive, indeed.

On the other hand, Ixia does a good job translating revenues into cash, with free cash flow for the past 12 months running to $79.5 million. Valued today at 16.1 times free cash flow and with even more cash in the bank, the company could well interest a buyer that thinks it will be able to shake up the company a bit, and shake Ixia out of its growth doldrums.