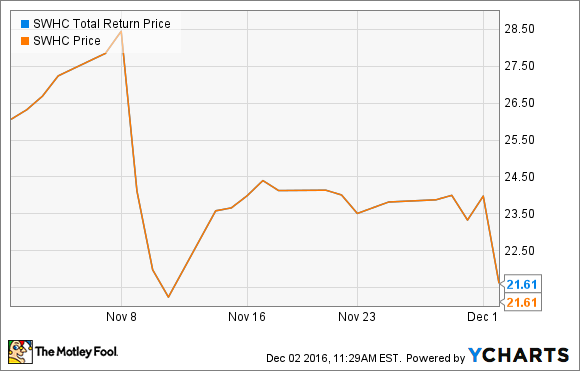 CEO James Debney pronounced himself "very pleased with our second-quarter results, which exceeded our financial guidance." Debney characterized consumer demand for guns as "strong" across the market, and noted further that Smith & Wesson in particular enjoyed "market share gains" during the quarter.

So if all the numbers were good -- and even better than expected -- then why is Smith & Wesson stock down? One answer could be investor concern over Smith & Wesson's curious decision to rebrand itself as "American Outdoor Brands Corporation," which is expected to take place on Jan. 1, 2017 (assuming shareholders approve the action).

Smith & Wesson has been diversifying its business toward less lethal endeavors than just manufacturing guns, and may hope that the rebranding will shield it from public disapproval of "gun stocks." On the other hand, the rebranding may remind investors of a possible ongoing "diworsification" of the company away from a product that -- let's face it -- has profited Smith & Wesson very well, as Thursday's results confirm.

Another culprit for the sell-off may be found in guidance. Management had previously told investors to expect $900 million to $920 million in revenue this year. New guidance issued Thursday confirms that management will now surpass the top end of that range, and perhaps take in as much as $930 million in revenue this year. On the other hand, the company narrowed its range of expected earnings to $2.42 to $2.47 (pro forma). S&W shaved a penny off the top end of its previous guidance to create the new range, which suggests Smith & Wesson now sees less upside to its business, after the election of Donald Trump, than it foresaw under a potential President Hillary Clinton.

Investors may be punishing the stock for the new guidance. If that's what's happening, then I think investors are overreacting, but that's their right to do so.