According to data from S&P Global Market Intelligence, Bristol-Myers Squibb's (NYSE:BMY) stock climbed higher by more than 11% last month. This double-digit move northward appears to have been triggered by the unexpected victory of Donald Trump over his Democratic opponent Hillary Clinton, perhaps signaling the end -- or at least the significant curtailing -- of the raging drug pricing debate inside the United States that's been weighing heavily on the shares of all major drugmakers this year. 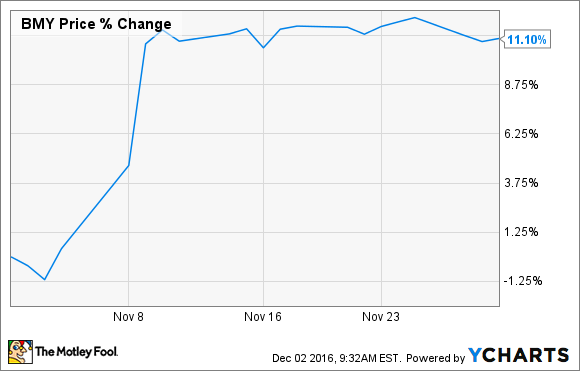 Prior to this rally, Bristol's shares were having trouble finding a bottom following the failure of Opdivo's pivotal stage study in front-line non-small cell lung cancer (NSCLC). In short, this critical failure opened the door for Merck's (NYSE:MRK) rival immunotherapy Keytruda to enter the market as the only approved checkpoint inhibitor for this high-dollar indication, and potentially eat into Opdivo's NSCLC market share for its approved use in later line settings.

Now, Opdivo may eventually break into the NSCLC front-line setting as part of a combination therapy, but there's no doubt that Merck's first-mover advantage isn't a major setback for Bristol and its shareholders. After all, this clinical miss may have wiped away approximately $4 billion in sales off of Opdivo's peak commercial potential.

Having said that, the good news is that Opdivo continues to rack up other important clinical hits and regulatory approvals. Last month, for instance, the FDA approved the drug for recurrent or metastatic SCCHN (squamous cell carcinoma of the head and neck). In other words, this miss in front-line NSCLC appears to be more of a hiccup than a worrisome new trend.

Bristol's shares, however, are arguably on the expensive side after this hefty surge based on its current forward price-to-earnings ratio of 18.7. So, it's probably not the most compelling buy in the pharma space at the moment.

Nonetheless, the drugmaker does offer deep value with Opdivo's overall stellar track record in the clinic, combined with its broader immuno-oncology pipeline that is among the best in the industry. That's why this stock may be worth picking up right now, despite its sizable premium compared to many other large-cap healthcare stocks.