Last week, SpaceX and mobile voice and data satellite company Iridium (NASDAQ:IRDM) announced a Dec. 16 mission for SpaceX's return to flight. The planned launch comes after the American rocket company's Falcon 9 exploded on the launch pad, destroying the rocket and a $200 million payload, in September. After being grounded for three months, this launch's success is critical for the future of SpaceX. But, before liftoff, the launch will need to be approved by the Federal Aviation Administration first.

If all goes according to plan, SpaceX's Falcon 9 will launch with 10 Iridium NEXT satellites, designed and manufactured with the help of aerospace companies Thales Alenia Space and Orbital ATK (NYSE:OA), at 12:36pm PT on Friday, Dec. 16. 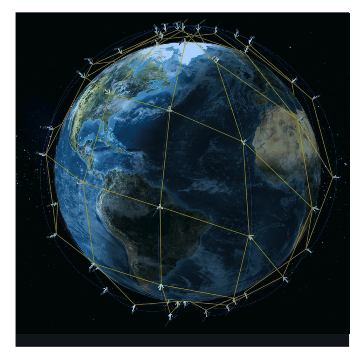 Artist's rendering of the Iridium Next constellation of satellites. Image source: Orbital ATK.

These 10 satellites are the first of 81 spacecraft that Iridium will deploy as part of its mission to replace satellites in an existing satellite constellation at a scale that has never been done before.

Orbital detailed the scope of the total project in its fact sheet for its contract to build the satellites:

"Iridium NEXT will replace the world's largest commercial satellite network of low-earth orbit satellites in what will be one of the largest 'tech upgrades' in history," Iridium said in a press release.

Iridium plans to launch 70 of these 81 satellites with SpaceX and still needs to decide on its plan for getting the final 11 spacecraft into orbit.

SpaceX's explosion during the Falcon 9's fueling in September, was likely caused by a freezing of liquid oxygen in the second-stage tank, according to SpaceX CEO Elon Musk. It was a significant setback for the company. After a string of successes, including eight successful payload deliveries and an incredible six rocket landings during 2016 alone, the company was building a notable reputation as not just a frequent, low-cost rocket company, but also a reliable one.

A landed Falcon 9. By landing its Falcon 9 rockets and reusing them, SpaceX plans to dramatically reduce the cost of launches. Image source: SpaceX.

Assuming the FAA approves SpaceX Dec. 16 launch from Vandenberg Air Force Base in California, the mission will play a vital role in mitigating any skepticism from customers and regulators.

It's particularly important for SpaceX to demonstrate dependability now since the company has been awarded, along with Boeing Company, a contract to transport U.S. crews to and from the International Space Station. With the program planning to begin ferrying astronauts as early as 2017, dependability from SpaceX is crucial.

Despite SpaceX's setback, Iridium is confident in the company. "We have remained confident in SpaceX's ability as a launch partner throughout the Falcon 9 investigation," said Iridium CEO Matt Desch last week.

Now we'll just have to wait to see if FAA approves SpaceX's return to flight, and if SpaceX can come back without a bang. Oh, and maybe SpaceX will stick one of its experimental landings while it's at it.