Shares of biotech giant Regeneron Pharmaceuticals (NASDAQ:REGN) rose more than 9% in November, according to data from S&P Global Market Intelligence. That move significantly outpaced the 6% gain of the iShares Nasdaq Biotechnology ETF (NASDAQ:IBB). 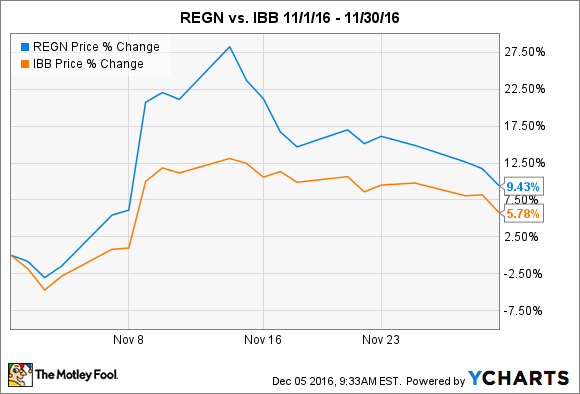 Beyond the general rally in the biotech sector caused by the surprise election of Donald Trump, shares of Regeneron reacted favorably to the release of the company's third-quarter earnings. Here's a look at a few of the highlights from the report:

In addition to earnings, the company also had two other positive announcements to share with investors in November.

Second, an independent Data Monitoring Committee (DMC) recommended that the company's ODYSSEY OUTCOMES trial should continue as planned. This trial is designed to measure the change in cardiovascular events in high-risk patients who use Praluent. This recommendation was made in response to the DMC performing a planned interim analysis of the trial.

All in all, it was a month filled with positive news, so it is no surprise to see that shares rose so much during the month. That's especially true when you remember that the stock dropped by double digits in October.

Looking ahead, there are plenty of upcoming events for shareholders to look forward to.

First, Regeneron and Sanofi are expecting a Food and Drug Administration decision on their monthly dosing option for Praluent on Jan. 24, 2017, as well as data from the ODYSSEY OUTCOMES trial in late 2017. If the trial shows that using Praluent helps to lower the risk of cardiovascular events, then sales will likely surge.

Second, the two companies should also receive a go/no-go decision from the agency about Dupixent (dupilumab), an atopic dermatitis drug, in late March. This drug is believed to hold blockbuster potential, so a positive decision would likely send shares soaring.

Finally, investors can look forward to Regeneron and Sanofi announcing their resubmission of sarilumab in the coming months as a hopeful treatment of rheumatoid arthritis. The FDA had previously rejected the two companies' application due to manufacturing issues that were identified in one of Sanofi's plants in France. Fixing the issues and resubmitted the drug for regulatory review remain a top priority for both companies.

Overall, the long-term bull case for Regeneron continues to look strong. With shares currently down more than 30% from their 52-week highs, right now could be a great time to consider joining me as a shareholder.