Regeneron Pharmaceuticals is packed with potential, and it's on sale -- so this Fool decided to take advantage.

The past year has not been kind to investors in the biotechnology sector. Shares of the SPDR S&P Biotech ETF (NYSEMKT: XBI), an ETF that holds a wide range of biotech stocks, are down more than 32% over the past 12 months. That's a horrific performance, especially when compared with the nearly flat returns of the S&P 500 over the same period. 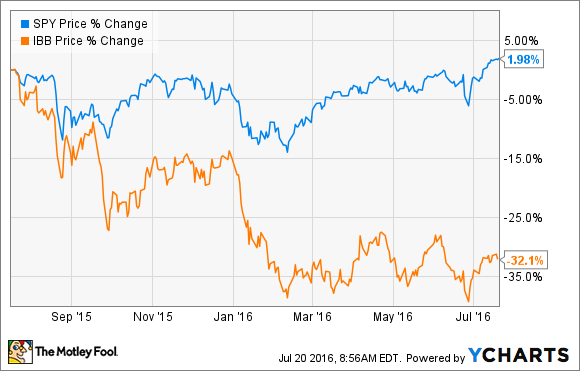 A huge underperformance like that hints that there's a lot of fear in the biotech sector right now, which means there are bargains to be had for investors who like to buy when others are in panic-selling mode.

I like to invest against the grain, so I stepped up to the plate last week and finally bought shares of one of my favorite biotech companies: Regeneron Pharmaceuticals (REGN -1.13%).

Here's why I decided to put real money behind this longtime winner.

The word "success" doesn't do justice to what this company has accomplished. Regeneron's market performance over the past decade has been nothing short of spectacular. Shares have risen a jaw-dropping 3,120%, which blows away the performance of the market and the biotech sector as a whole. 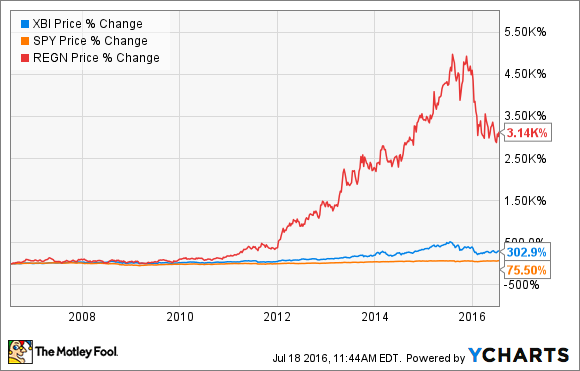 Sales of Eylea jumped a huge 44% in the U.S. last quarter, putting the drug on pace to reach nearly $5 billion in worldwide sales this year. For the full year, management believes that growth will be north of 20%, which on its own might just make Regeneron a buy at today's prices. That's especially true when you consider that the baby boomer generation is entering retirement age, so demand for Eylea is likely to remain strong for years to come.

But there's more to this company's growth story than just Eylea.

A blockbuster in the making?

Clinical data showed that Praluent reduced a patient's LDL cholesterol -- that's the bad one -- by up to 58% versus placebo, which is a massive improvement. With a wholesale price tag of $14,600 per year and millions of potential customers, this drug could really be a needle-mover for both Regeneron and Sanofi.

Despite its huge potential, Praluent hasn't exactly gotten off to a fast start, which has understandably left some investors worried. The tepid growth is primarily owed to two main factors.

First, providers are waiting for long-term cardiovascular outcomes data from the ongoing Odyssey Outcomes study. If that study shows that using Praluent lowers a patient's risk of having a heart attack or stroke, then providers are likely to significantly increase their willingness to prescribe the drug.

Second, Regeneron and Sanofi have been giving out samples like crazy in an effort build market share against Amgen's Repatha, and you can imagine that some of these freebies are taking the place of would-be-paid product. In addition, Amgen has gone on the offensive, even using the legal system to fight back.

Both of these factors are suppressing sales right now while at the same time adding to the company's costs. The future here is uncertain right now, and we won't find out until 2017 if all of the effort has been worth it.

Even if Praluent turns out to be a dud, all hope is not lost. The company has two other shots on goal that I'm particularly excited about.

The first is a drug called Sarilumab, which is currently pending FDA approval as a treatment for rheumatoid arthritis. Regeneron and Sanofi reported data earlier this year showing that Sarilumab outperformed AbbVie's megablockbuster drug Humira at treating patients with active rheumatoid arthritis. That hints that the FDA is likely to give the drug the thumbs-up, and it also stands a good chance of winning share away from Humira when it comes to market. A decision is expected on Oct. 30, with annual sales expected to eclipse $1 billion.

The second drug that excites me is called Dupilumab, which is a potential treatment for asthma and atopic dermatitis. Regeneron and Sanofi reported strong data from two phase 3 trials earlier this year when used to treat moderate to severe atopic dermatitis.

Right now there's a huge unmet medical need for drugs that treat atopic dermatitis, which tells me that this drug stands a very good chance of getting approved and growing fast. The FDA has granted Dupilumab with breakthrough therapy designation, and analysts are calling for peak annual sales over $4 billion. Regeneron should have this exciting drug in regulators' hands later this quarter.

Add it all up, and Regeneron could have four billion-dollar drugs on the market within two years' time. Perhaps now you understand why analysts believe that the company's long-term earnings growth rate will exceed 19% annually from here.

All for a bargain price

Despite all of what you've read, Regeneron's shares have basically traded in lockstep with the IBB over the past year. 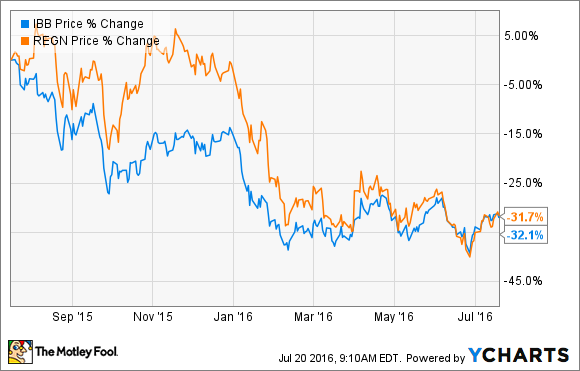 That sell-off has knocked down the valuation so much that shares are currently trading hands for about 25 times next year's earnings. That's still a premium price, but I'm a firm believer that Regeneron is a high-quality company with an extremely bright future head, so I, for one, am happy to pay up to own shares.