The two best-performing growth stocks in 2016, as of Nov. 29, are NVIDIA Corporation (NASDAQ:NVDA) and Acacia Communications (NASDAQ:ACIA), which have returned 196% and 129%, respectively. Moreover, Acacia has accomplished its impressive feat in less time than 11 months, as it just went public in mid-May. 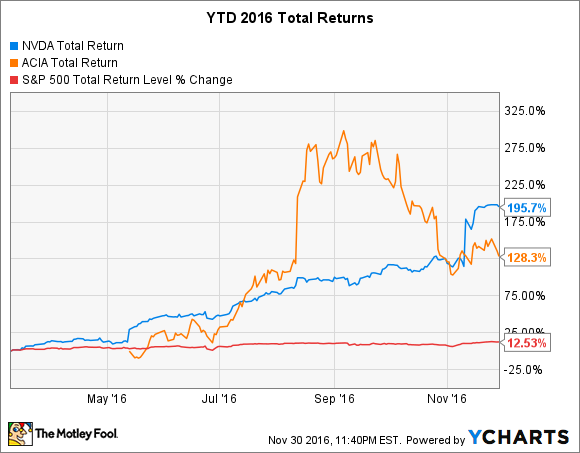 There are countless ways to define "growth stocks," so here's the specific screen used to find our gold and silver medalists:

This screening turned up Weibo Corp -- which went public in 2014 and has been called the "Twitter of China" -- as No. 2, but I'm skipping it. It might well be a fine company and stock -- I'm not that familiar with it -- but the veracity of the financial statements of enough Chinese companies have been called into question that most average investors should probably steer clear of investing in all but the top names. Moreover, following U.S.-based companies should be easier for most U.S.-based investors.

Graphics and mobile computing specialist NVIDIA has been firing on all cylinders. The Silicon Valley-based company is the dominant player in its traditional business of selling discrete graphics-processing units (GPUs) for computer gaming, with this core business continuing to grow like gangbusters. In NVIDIA's recently reported third quarter, revenue generated from gaming products soared 63% year over year, to $1.24 billion, accounting for 62% of NVIDIA's total revenue.

In addition to its platforms for gaming and professional graphics, for which it's well known, NVIDIA has two other major platforms that are also performing fantastically and have much further growth potential: automotive and data center. Like gaming revenue, automotive computing sales increased by a little more than 60% in the third quarter. Sales to the data-center server market tripled to $240 million in the quarter.

NVIDIA -- whose stock has a market cap of $49 billion -- has much growth potential because its products have uses in many of today's relatively nascent, but fast-growing, technologies, such as artificial intelligence (AI) computing, self-driving cars, and virtual reality (VR).

However, given that the company regularly beats Wall Street's estimates -- it crushed them by 47% in the third quarter, for instance -- there's good reason to believe that this long-term growth expectation will prove too conservative. The stock is priced at 35.1 times forward earnings -- not overly pricey for a proven winner with much long-term growth potential. 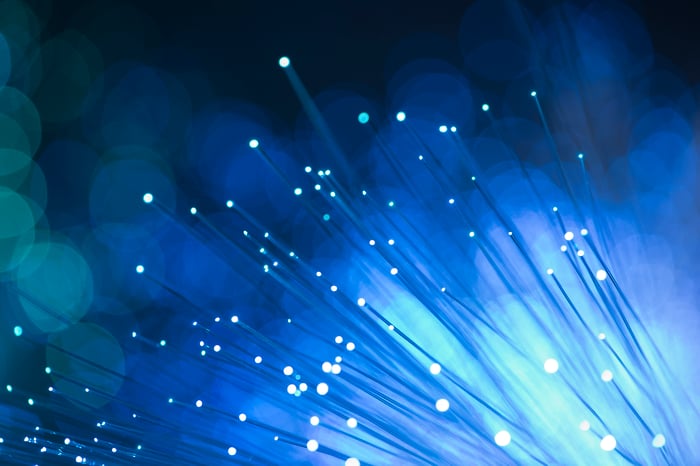 Acacia's optic components provide fiber-optic connectivity for long-haul, metro, and interconnected data-center networks. The Massachusetts-based company -- whose stock has a $2.5 billion market cap -- has been benefiting from the growth of cloud computing and other applications that need the speed and strength of fiber connections as they expand. The rollout of 5G services by wireless networks over the next couple of years will require significant infrastructure upgrades, which should provide a catalyst for growth for fiber-optic companies, in general.

While Acacia's stock is still a huge winner for investors who bought it for $23 at its May IPO -- the stock closed at $70.67 on Nov. 29 -- or in its first few months of trading, it's fallen sharply since October, as the chart at the top shows. There have been two main culprits.

In early October, the company released pricing for its secondary stock offering that was lower than the price the stock was trading at on the day of the announcement, suggesting demand for the stock could be weakening. Then in late October, Chinese telecom gear-maker ZTE Corporation released weaker-than-expected third-quarter earnings and guidance. This unnerved the market because ZTE is Acacia's largest customer.

Analysts estimate that Acacia will grow EPS at a brisk average annual rate of 37.2% over the next five years. The stock is priced at 19.7 times forward earnings, which is a reasonable valuation assuming that Acacia meets these growth expectations. The fiber-optic space has great potential, but it's also very competitive.