Graphene might be the hot new tech -- but it's hard to find any top graphene stocks to invest in.

So you want to know how to invest in graphene stocks? Well, I've got good news and bad news for you. 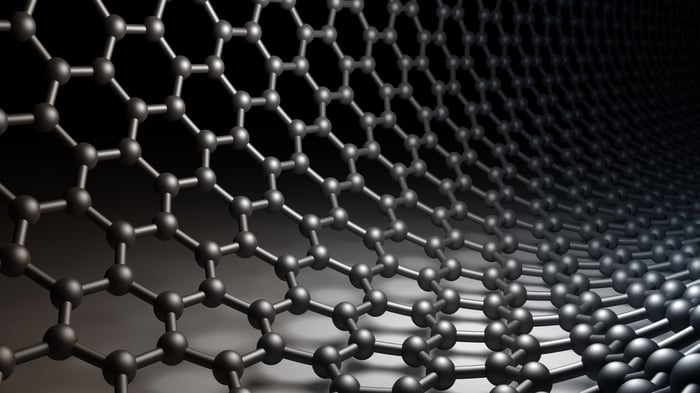 But let's back up a minute and review what graphene is. At its most basic level, graphene is a sheet of hexagonally bonded carbon atoms (as illustrated above) just one atom thick.

Advocates of graphene technology argue that it can be used to create materials 200 times stronger than steel, better at conducting both heat and electricity than copper, and sufficiently flexible that it can be used to form super-strength "tubes" for use in construction, for example. These properties have some people thinking graphene will become the hot new tech, and point to the huge number of graphene patents being taken out by companies such as Samsung, IBM, and SanDisk as evidence of the material's potential.

But how much potential is there for investors to profit from graphene stocks?

Applying some logic to investing

It seems reasonable to me to assume that if graphene is a big enough part of a company's business to affect its fortunes, this fact should be reflected in the company's filings with the SEC. Following that logic, I searched through SEC filings for the past couple of years, seeking out name-brand companies that mention the use of graphene in their SEC filings.

Surprisingly, though, very few companies make any mention of graphene whatsoever. Oh, the SEC files are full of companies with names like  "China Carbon Graphite Group" that sound like they should be big into graphene. But most such companies are little more than Potemkin businesses. They have no revenue or profit to speak of, and little market capitalization. They barely exist, even on paper.

What's more, those few companies that do mention graphene have little to say about it. Here are a few of the more substantial companies that appear in the SEC filings and are doing work related to graphene.

Nokia (NOK 1.66%) is one of several high-tech companies that have made the news in recent years for filing graphene patent applications. Nokia also appears to be putting this patent knowledge into practice. In a 2015 6-K filing, Nokia reported that "Nokia Technologies developed a proof-of-concept flexible printed graphene circuit, demonstrating continued progress solving many of the technical challenges related to the practical application of the ultra-thin, transparent, flexible material." Graphene news still pops up on Nokia-related websites from time to time -- but to date, still no actual products utilizing the technology.

Germany-based Aixtron (NASDAQ: AIXG) has even more to say about graphene. In one recent 6-K filing with the SEC, it wrote: "One focus of AIXTRON's [research] involves researching processes and systems technology for the deposition of optically active 2D semiconductor materials such as ... graphene ... AIXTRON offers a Plasma Enhanced Chemical Vapor Phase Deposition ('PECVD') technology ... employed for the deposition of complex Carbon Nanostructures (Carbon Nanotubes, Nanowires or Graphene)."

Aixtron's primary business is selling equipment that semiconductor manufacturers use to produce computer chips, LEDs, and similar high-tech stuff. As such, it behooves Aixtron to perform R&D into how to manufacture graphene products at scale. But even so, Aixtron notes that the "development of applications using Carbon Nanostructures (Carbon Nanotubes, Carbon Nanowires, Graphene) [will] possibly have a positive effect on future business," but only over the "mid- to long-term."

Netherlands-based ASML (ASML 0.92%) is in a similar line of business to Aixtron's, but is even less enthusiastic about graphene's potential to disrupt the semiconductor industry. In a filing describing its 2014 annual general meeting of shareholders, ASML noted that: "with respect to graphene as a possible replacement for silicon ... even in the event graphene would be used as material, lithography will be required to be able to manufacture semiconductors."

Shifting gears slightly: Cabot Corporation (CBT 1.19%) is more of a specialty chemicals and performance materials company than a dedicated electronics specialist. In a 2016 SEC filing, Cabot Corp noted that its products include "rubber and specialty carbons ... graphenes, inkjet colorants and inks, and masterbatches and conductive compounds."

Such language suggests that graphene may have wide-scale application in industry, but there's just one problem: That single line quoted up above is all that Cabot has to say on the subject of graphene. There's literally no further mention in the company's filing of graphene's use in its business. Clearly, graphene is not an important source of revenue to Cabot -- at least not yet.

So what's the big takeaway from all of the above? Investing in graphene may have potential at some time in the future. But as Aixtron notes, graphene's potential will not be fulfilled anytime soon. It lies far off in the medium term, or even the long term.