2016 has been a great year for TASER International, Inc. (NASDAQ:AXON) -- the stock has risen and operations have gotten stronger. Net income may not show the company's strength, but that's because it's building out new products and sales infrastructure that will drive future growth. And the investment is paying off so far. 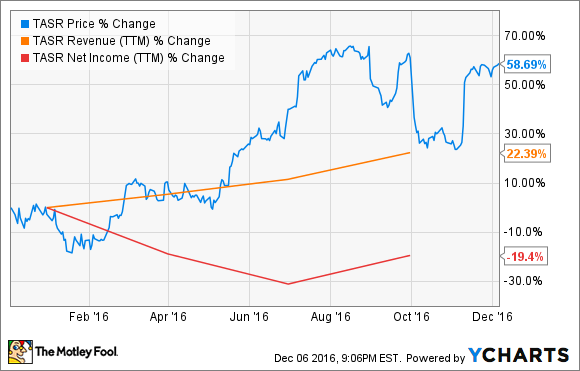 Why 2017 will be even brighter

The future of TASER International isn't about tasers at all. Despite selling $191.0 million in tasers in the past year, the future of the business is really about body cameras.

Axon, which is the body camera segment, has generated $41.9 million in revenue so far this year -- which seems small, but that's up 60% from a year ago, and its growth is going to continue at a strong rate.

Then consider that Axon services, which include Evidence.com cloud data systems, generated nearly half of the Axon segment's revenue and came with an 81% gross margin last quarter. And most body camera sales come with multi-year Evidence.com contracts, leading to future contracted revenue of $302.0 million at the end of the third quarter. As these contracts pile up, TASER International will see net income surge in the future.

What could make 2017 a great year are the investments management has made in sales and data services in international markets like Australia and the U.K., where large cities are starting to look into body cameras. These markets are just starting to be tapped, and that could lead to continued strong growth in 2017.

The risk for TASER International in 2017 comes down to the international market I just highlighted. If the company loses contracts to emerging competitors like Digital Ally or Safariland's Vievu, it could mean the operating expenses meant to grow operations aren't paying off.

Investors will want to watch the bookings number reported in Axon and Evidence.com, which is reported each quarter with earnings. Over the past year, bookings have been $44.7 million or higher, so investors will want to see that figure grow. If it doesn't, the stock could be in for a rough year because it could show that investments made in new products aren't paying off as expected.

TASER International's stock may not have as good a year in 2017 as it did in 2016, but it looks like both industry and margin trends are working in its favor. Less lethal weapons are becoming more important in law enforcement, communities are demanding body cameras, and as the Evidence.com database grows its high margin will bring strong profitability. That's why I think TASER International is in for another good year in 2017.