Wearables have been getting a lot of attention in the last few years, and have only grown in popularity among the market and market analysts in 2016. From basic pedometers to wearables that are miniature computers, wearable fitness device companies are increasingly trying to set themselves apart with new ways to better serve the fitness market. 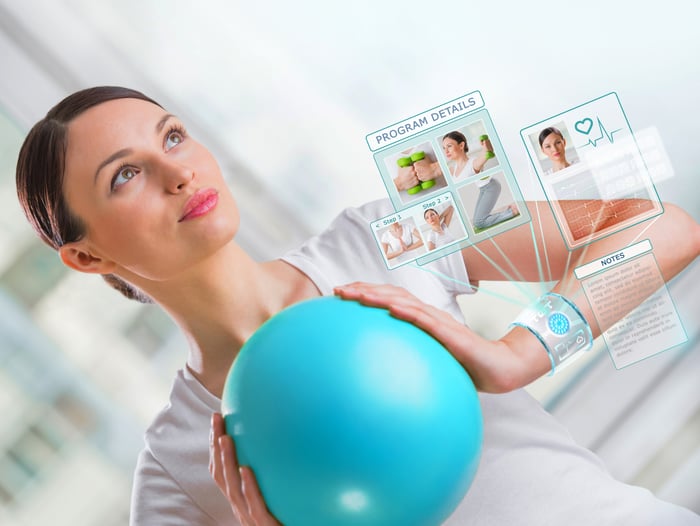 What was this year's most expensive wearable fitness device? To make that determination, I didn't consider medical devices such as glucose monitors, since they don't really qualify as a "fitness" device. I tried to consider only devices that were truly fitness-oriented, and that could be purchased directly from the brand without including things such as third-party watch band options that might increase the price without changing the actual device.

With all that in mind, the most expensive wearable fitness device of 2016 was Apple's (NASDAQ:AAPL) new Apple Watch Series 2 Edition, retailing for a cool $1,299.

Apple's signature wearable, the original Apple Watch, made a splash in the industry when it was launched in 2015 as a premium smartwatch to be paired with a user's iPhone to get alerts, offer connectivity for third-party apps, and utilize fitness features such as activity tracking and heart-rate monitoring.

The new Series 2 watch, launched in September, is now waterproof, comes with stand-alone GPS for run tracking without being connected to your phone, and has other upgrades such as longer battery life, a brighter screen, faster operating software, and a louder speaker. Here's a more detailed review, but basically the Apple Watch 2 is not a huge overhaul of the Apple Watch 1, though the upgrades make it much more suitable for fitness enthusiasts.

If you'd like that watch cased in ceramic, which Apple's site says is "engineered to be as strong as it is beautiful," then you'll pay $1,299 for the luxury fitness device. The Apple Watch 2 starts at $369 for the smaller-sized "sport" version, however. While there certainly seem to be people willing to pay this hefty price for a fitness device, the data shows that the real market growth so far seems to be in the "basic wearables" segment, which includes those that don't offer third-party apps, such as Fitbit (NYSE:FIT).

The fitness-device market in 2016 and beyond

The Apple Watch 1 is now available for as low as $269. That's only slightly higher than Fitbit's most premium model at $250, but it's substantially more than Fitbit's most popular trackers for around $100 to $200. The most recent numbers of how well each company's devices are selling continue to show that the growth is with the lower-cost basic fitness devices, which control 85% of the market.

The International Data Corporation (IDC) reports on fitness-device sales worldwide. In the most recent data for the third quarter through September, Fitbit maintained its leadership position and grew its market share (by total units shipped) from 21.5% in Q3 2015, to 23% in Q3 2016, thanks to an 11% increase in units sold. Apple Watch shipments during that time declined by 71% so that Apple's market share dropped from 7% to less than 5%.

These numbers look weak for Apple, but consider that the Apple Watch Series 1 has now been out for two years and that Q3 data includes only a few weeks of the Apple Watch Series 2 on the market. Therefore, Apple's units sold may grow more in Q4 when the new watch has been out for a full quarter. The reverse is true for Samsung (NASDAQOTH: SSNLF), which released two new smartwatches in Q3 and shipped more units by bundling them with Note 7 and other Samsung phones.

Still, there's no getting around the fact that it's clearly still a basic-fitness-device market for the time being, and Fitbit seems to be growing its lead even in the face of cheaper options such as Xiaomi, with its $15 trackers. For 2017 and beyond, this looks like a growing opportunity for the companies in the basic-wearables space to take charge of this growing market, which IDC expects to grow from about 101 million units shipped in 2016 to 213 million by 2020. Fitbit has had its share of poor sentiment on Wall Street lately, but these numbers certainly look encouraging now.