It's been more than two years since oil prices dropped from $100 per barrel to below $50 per barrel and more or less stayed there -- until now. A vastly oversupplied oil market led to the drop and OPEC's infighting kept it from fixing the oil glut, leading to a decline in oil stocks and even bankruptcies in the energy industry.

As we look forward to 2017, OPEC says it is cutting production, and higher prices may once again be on the horizon. Here are a few things to consider when you're looking at energy next year.

The oil glut is disappearing

Falling oil prices will eventually lead to both rising demand and falling supply as drillers cut back. But the reaction isn't instantaneous. You can see below that the oil market has been oversupplied since early 2014, but it wasn't until the middle of 2016 that supply and demand got more in sync. 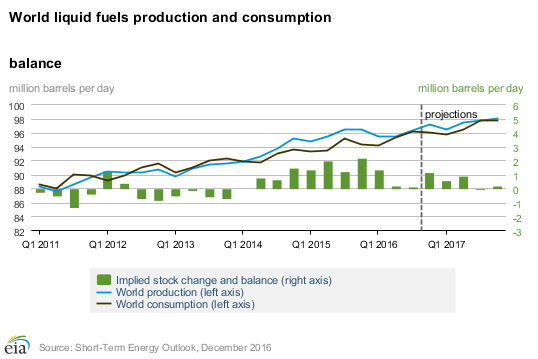 The inventory glut isn't very big at all

The oversupply situation has led to excess inventory, which shows up in the green line below exceeding the "normal level" in blue. 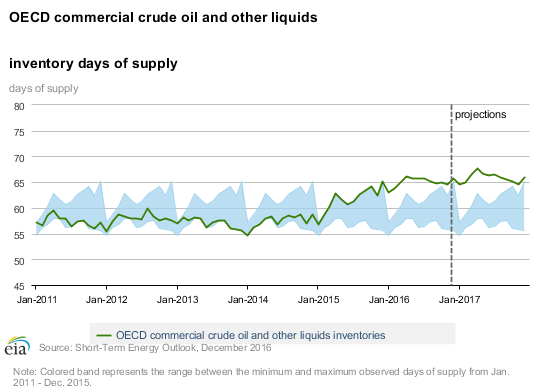 What's important to note here is scale. Oil markets absolutely have too much inventory, but there's currently just 64 days of inventory stockpiles in OECD countries, which is up from just 55 days at the low point in January 2014. The surge in inventory beween January 2014 to today is about 865.8 million barrels in total. And that excess could evaporate if supply falls below demand for a year or two.

OPEC has played its hand

Compare this to the 0.44 million barrels the EIA predicts the oil industry will be oversupplied by next year and you could see 1.4 million barrels of undersupply. It will take nearly two years to eat up the inventory increase at that rate, but it'll be a big shift for oil prices to start seeing upward pressure from nearly three years of downward pressure brought by excess supply.

Inventory will act like a buffer between undersupply and rapidly rising oil prices, but the buffer won't last forever. Investors will want to watch if OPEC holds production cuts together and what happens to global supplies and inventory as a result.

New supply may take a while

Where does that leave energy companies and the stocks you may invest in? The answer to that depends a lot on whether oil prices rise, how quickly the rise comes, and how oil drillers respond.

Shale drillers can increase production more quickly than large projects in ultra-deepwater, arctic regions, or oil sands, but production won't be instantaneous and may take a while to make up the potential 1.4 million barrel per day gap I discussed above. You can see below that over the last two years U.S. shale production decline has been approaching 1 million barrels per day and falling. How shale drillers respond to higher prices will be important to watch. 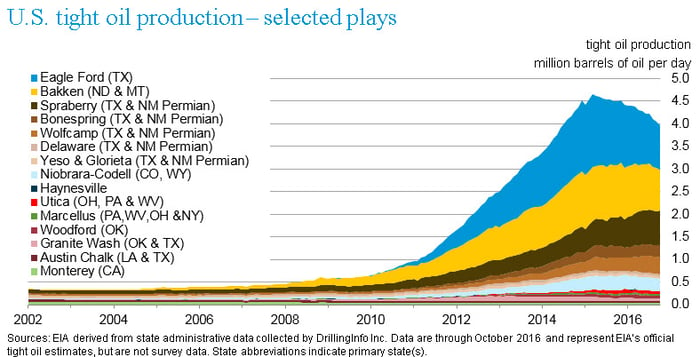 Two companies who have tailwinds with rising oil prices are Continental Resources (NYSE:CLR) and Whiting Petroleum (NYSE:WLL), who were both hit extremely hard when oil prices dropped. But as two of the biggest fracking companies in the U.S., they would increase cash flow tremendously if oil prices rise. And that wouldn't even require investments in new production.

On the new production side, we could see a lot of investment if oil prices rise enough. Halliburton (NYSE:HAL) and Schlumberger (NYSE:SLB) would likely benefit significantly from an increase in shale drilling. And with rig counts already rising on the increase in oil prices, there could be some strong momentum here.

Offshore it's a little more uncertain for major drillers like Seadrill (NYSE:SDRL) and Transocean (NYSE:RIG). Shallow water rig demand can pick up quickly if oil prices rise, but the deepwater market may take longer to recover, and that's where the real money is. Unlike shale plays, deepwater drilling can take years for explorers to develop, and they may not want to take financial risks immediately if oil prices rise. So it may take time for confidence to return to the deepwater market.

For the first time in more than two years we can see how there may be a significant increase in oil prices on the horizon. And if that takes shape it'll impact everything from oil explorers to automakers to costs for businesses around the world. The supply/demand balance, inventory level, and OPEC's production cut are worth keeping an eye on because they'll have implications for energy prices for all of us next year.