Electric-car start-up Lucid Motors unveiled its first product in a media event in California on Wednesday. Lucid's Air is a sleek high-performance sedan that will have specifications and pricing calibrated to compete directly with Tesla Motors (NASDAQ:TSLA).

This is significant, and investors interested in electric and self-driving cars should sit up and take note. The Lucid Air is no flight of designer fancy. It's a serious product, and Lucid is a serious company that stands an excellent chance of succeeding. Read on. 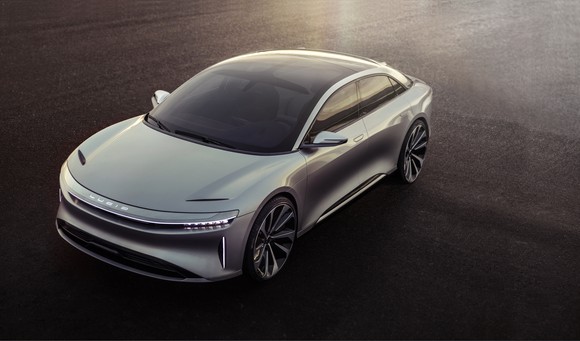 The Lucid Air is a big luxury sedan that promises to combine extreme high performance with a roomy, comfortable, and quiet interior equipped with a lot of advanced technology.

Like the top Tesla models, the Lucid Air should be very fast, at least in a straight line. It might be even faster: Lucid claims "best-in-class energy density" for the Air's 100 kilowatt-hour battery pack, which it says will give the Air "in excess" of 300 miles of range.

Once the Air is in production, a 130 kWh battery pack will be available as an optional upgrade. That will offer "up to" 400 miles of range and "up to" 1,000 horsepower. Both figures are a step ahead of what Tesla's current top-performing models can deliver right now. 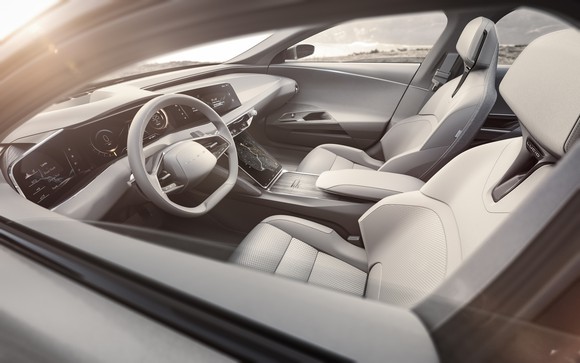 The Air's motor and transmission unit was developed entirely in-house, Lucid said. It claims that it's "smaller, more efficient and more power-dense than competitors, while potentially more reliable." (The word "potentially" is doing a lot of work in that sentence. But as we'll see, Lucid's engineers are not new to the car business.)

Inside, Lucid promises "executive seating" with cushy, reclining rear seats that offer comfort and legroom comparable to first-class airline seats. A 29-speaker audio system will provide active noise cancellation to ensure that it's a quiet space.

As you'd expect from a Silicon Valley automaker, self-driving technology will be built in. Lucid will aim to have the Air equipped with "Level 4" self-driving capability at launch, pending approval by U.S. regulators. "Level 4" systems can take full control of the vehicle under most (but not all) conditions, with little to no involvement from the human driver. 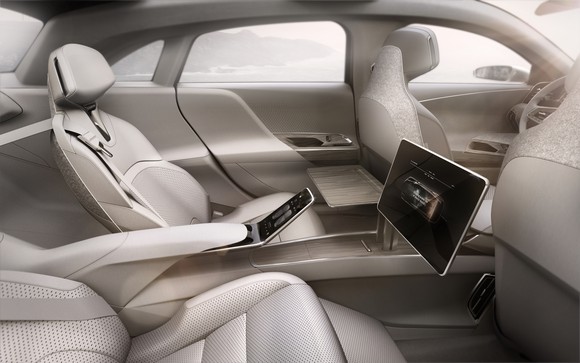 Lucid hasn't finalized pricing for the Air. But it said that a fully loaded "launch edition" will be priced around $160,000, with standard versions starting around $85,000. Lucid hopes to get the starting price down to around $65,000 in time.

If all goes according to plan, production of the Air will begin in late 2018. But some big things have to happen in order for that plan to pan out.

Is this vaporware, or is it for real?

It's for real. This is not vaporware. It could turn out to be a big deal. But there are some caveats that come with that statement.

For starters, Lucid is a real company, founded in 2007. It has about 330 employees, many with past experience at Tesla or at large global automakers. Its chief designer, Derek Jenkins, was formerly the director of design at Mazda North America. And Peter Rawlinson, the chief technology officer, came to Lucid with one of the greatest electric-car resume credentials possible: He was chief engineer on the Tesla Model S.

In some ways, the Lucid Air can be thought of as the Model S 2.0. It's a very serious, advanced design that reads in many ways as a redesigned Model S informed by experience. And it's clearly very close to production-ready. It's not a show car.

But that's where the caveats come in: Right now, Lucid doesn't have a factory in which to build the Air or anything else.

It has a site for a factory, in Casa Grande, Arizona, selected for its proximity to key auto-industry suppliers in Mexico. It has a package of subsidies promised by the Arizona state government, and a detailed plan to start constructing the $700 million facility in the second quarter of 2017.

But it will need to raise money to make the factory a fully functional operation. Lucid has said that future fundraising rounds are planned, but it hasn't yet given specifics.

So should we take Lucid Motors seriously?

I think we should. Lucid seems to be positioning itself as a sober-minded ("lucid") alternative to Tesla, in part by making a point of being entirely focused on electric automobiles. It doesn't have a whiz-bang CEO like Elon Musk -- but Lucid (which employs a lot of Tesla veterans, remember) might argue that Musk's outsized public image and futuristic visions take attention away from Tesla's products in the here and now.

If anything, Lucid seems quietly determined to learn from (and not repeat) Tesla's missteps. It won't rush the Air into production nor let itself get distracted by far-future visions. That "lucid" attitude, the car itself, and the serious cash already invested in the company make it worth close attention as its plan unfolds.